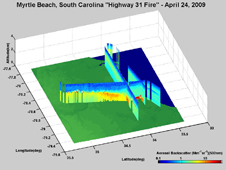 These vertical profile images, taken the afternoon of Friday, Apr. 24 using the Langley Science Directorate's High Spectral Resolution Laser, show how the plumes of smoke from the Myrtle Beach wildfire moved up and away from the source. The data will be used to improve EPA models of fire emissions. Credit: NASA HSRL Team
Larger image 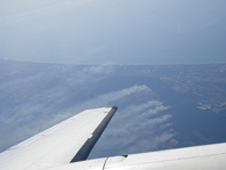 Langley researchers Mike Wusk (who took this photo) and Ray Rogers and pilot Les Kagey flew a King Air B200 equipped with a High Spectral Resolution Laser over the wildfires in South Carolina to measure the behavior of the smoke plume produced by a blaze that ultimately burned 19,600 acres of land. Credit: Mike Wusk/NASA HSRL Team
Larger image 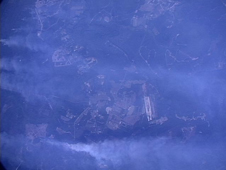 A camera mounted underneath the King Air B200 snatched this aerial image of the fires. Credit: NASA HSRL Team
Larger image

When a pile of burning debris got out of control and sparked a wildfire north of Myrtle Beach, S.C., in late April, a team of researchers from NASA Langley's Science Directorate jumped into action.

The group, including scientists from NASA and U.S. Environmental Protection Agency (EPA), had been watching for an opportunity to collect real-world data on wildfires with a High Spectral Resolution Lidar (HSRL) on-board a King Air B200. This specially instrumented aircraft takes vertical measurements of aerosols – in the case of fires, smoke – that helps researchers understand how much smoke is produced by fires and how high smoke plumes rise and move through the atmosphere. Data on smoke plumes and wildfire emissions are needed by researchers to better understand their impact on regional air quality and the climate system.

The morning of Friday, Apr. 24, two days after the fire began to spread, pilot Les Kagey, operations engineer Mike Wusk and lidar researcher Ray Rogers lifted off from Hampton, Va., for a day of criss-crossing smoke plumes from the Highway 31 fire. The research derived from this study, which is funded by the EPA, will be used to improve air pollution models that the agency uses for policy and regulatory decisions, said Jim Szykman, an EPA scientist from the National Exposure Research Laboratory in the Office of Research and Development, who is stationed at Langley.

"We've been talking about how we’d respond to an opportunity like this for some time – a quick deployment of the HSRL," Szykman said. "You never know when a fire is going to start and we wanted to test our readiness. Though unfortunate this was our opportunity."

The HSRL team had recently finished flights used to validate the measurements made by the Langley-managed Cloud-Aerosol Lidar and Pathfinder Satellite Observation (CALIPSO) satellite, and was able to react quickly when the South Carolina fire broke out, Szykman said. The lidar was also used last year in the Arctic Research of the Composition of the Troposphere from Aircraft and Satellites (ARCTAS) campaign to observe aerosols and smoke in the Arctic and, in collaboration with the EPA, to sample pollution in California’s San Joaquin Valley in 2007.

The Highway 31 fire ultimately burned about 19,600 acres, forced the evacuation of about 4,000 people, and destroyed about 70 homes while damaging even more. The fire burned on private and state-owned lands made up of a common southeastern ecosystem, pine forest with peaty soils that can smolder long after the fire is largely contained. The fire burned more intensely on Thursday, prior to the lidar overflight, but Friday’s flight still captured intense flare-ups and smoldering fuels, which are crucial to piecing together a complete picture of fire emissions.

An afternoon of flying over the fire’s smoke plume produced data on the plume’s height, the amount of aerosols – smoke, soot and haze – generated by the fire, and how the aerosols eventually dispersed in the atmosphere. The data from the research flight will be useful, and are a precursor of research the EPA and Langley’s Science Directorate, including researcher Amber Soja, have in store for the 2009 fire season, Szykman said. The data will also be combined with other observations and measurements – including fire temperature and land-use practices to learn more about how fires burn in various ecosystems.

The EPA develops annual fire emission estimates in conjunction with state and local agencies and other federal agencies including the U.S. Forest Service (USFS). Fires are one of many important emission sources that are inputs to EPA's regional chemical transport model known as the Community Multiscale Air Quality (CMAQ) model. The model is used by the EPA for environmental management and policy activities including setting regulations and regional strategy development for attainment of National Ambient Air Quality Standards.

These data and future CALIPSO and HSRL data will be used as part of a larger collaboration between NASA, EPA, Michigan Tech Research Institute, University of Louisville and the USFS to enhance the inclusion of fire emissions in the National Emissions Inventory and the height of smoke plumes in the CMAQ. Current climate change scenarios predict fire severity will increase, making it increasingly important to understand the impact of smoke and aerosols on air quality, human health and the climate.

"We continually try to improve how our models perform," Szykman said. The data from the South Carolina flight "will give us a better understanding of how well the modeled data predicts the real data we gathered from actual fires."