Extreme rainfall and heavy snowmelt have combined this spring to bring the Mississippi River roaring beyond its banks. While humans on the ground have scrambled to evacuate, build sandbag walls and taken dramatic measures not seen in decades – blowing levees and opening the Morganza Spillway – satellites have provided a distinct view of the extraordinary extent of the flooding.

The Landsat 5 satellite flew over the Mississippi on May 10, 2011, about eight days after the Army Corps of Engineers began blasting holes in earthen levees near Cairo, Illinois, when the river had reached a depth of 61 feet. Breaching the levee at the Birds Point-New Madrid floodway, where the Ohio and Mississippi rivers meet, allowed water to run onto 133,000 acres of designated floodway land. But the blasting protected about 2.4 million acres downriver, the Army Corps said.

Putting the May 10 image side-by-side with an image from April 2010 shows the dramatic extent of the flooding. At one spot along the Kentucky-Missouri border, the width of floodwaters stretches 13 miles. In Memphis, the depth of the floodwaters reached 48 feet, inches below a record set in 1937.

Illinois, Indiana, Kentucky, Ohio, Pennsylvania and West Virginia – all of which at least partially drain to the Ohio and Mississippi rivers – each had their wettest April since 1895, according to NOAA's National Climatic Data Center. The 12 months from May 2010 to April 2011 were also the wettest on record for Minnesota, North Dakota and Wisconsin.

On May 14 – after this Landsat image was captured – the Army Corps opened the Morganza Spillway in Louisiana to relieve flooding. 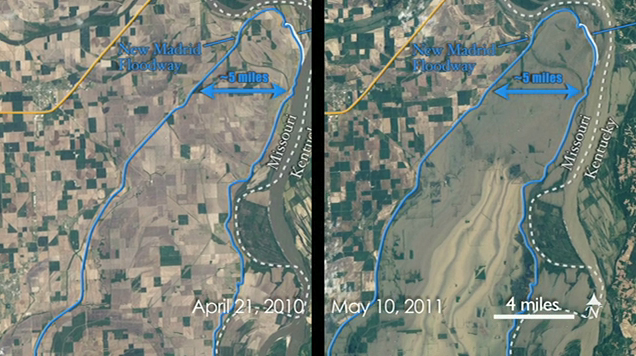 Landsat is a joint mission between NASA and US Geological Survey, and is the longest-running Earth-observing satellite program. Landsat satellites have been orbiting continuously since 1972. The next satellite in the series is scheduled to launch in 2012 as part of the Landsat Data Continuity Mission (LDCM).

› Landsat and the Mississippi River Flooding

Blog posts about historic flooding on the Mississippi: