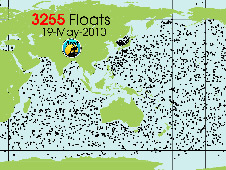 The upper layer of Earth's ocean has warmed since 1993, indicating a strong climate change signal, according to a new international study co-authored by oceanographer Josh Willis of NASA's Jet Propulsion Laboratory, Pasadena, Calif. The energy stored is enough to power nearly 500 100-watt light bulbs for each of the roughly 6.7 billion people on the planet continuously over the 16-year study period.

"We are seeing the global ocean store more heat than it gives off," said John Lyman, an oceanographer at the National Oceanic and Atmospheric Administration's Joint Institute for Marine and Atmospheric Research, who led the study that analyzed nine different estimates of heat content in the upper ocean from 1993 to 2008.

The team combined the estimates to assess the size and certainty of growing heat storage in the ocean. Their findings will be published in the May 20 edition of the journal Nature. The scientists are from NASA, NOAA, the Met Office Hadley Centre in the United Kingdom, the University of Hamburg in Germany and the Meteorological Research Institute in Japan.

"The ocean is the biggest reservoir for heat in the climate system," said Willis. "So as the planet warms, we're finding that 80 to 90 percent of the increased heat ends up in the ocean."

Combining multiple estimates of heat in the upper ocean - from the surface to about 610 meters (2,000 feet) down - the team found a strong multi-year warming trend throughout the world's ocean. According to measurements by an array of autonomous free-floating ocean floats called Argo, as well as by earlier devices called expendable bathythermographs, or XBTs, that were dropped from ships to obtain temperature data, ocean heat content has increased over the last 16 years.

The team notes that there are still some uncertainties and some biases.

"The XBT data give us vital information about past changes in the ocean, but they are not as accurate as the more recent Argo data," said Gregory Johnson, an oceanographer at NOAA's Pacific Marine Environmental Laboratory. "However, our analysis of these data gives us confidence that on average, the ocean has warmed over the past decade and a half, signaling a climate imbalance."

Data from the array of Argo floats -- deployed by NOAA and other U.S. and international partners -- greatly reduce the uncertainties in estimates of ocean heat content over the past several years, the team said. There are now more than 3,200 Argo floats distributed throughout the world's ocean sending back information via satellite on temperature, salinity, currents and other ocean properties.