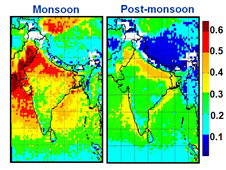 MISR data were used to measure the concentration of aerosol pollutants over the Indian subcontinent and how it varies by season. The most polluted areas are depicted in red. Image credit: NASA/JPL-Caltech/University of Illinois
› Larger image

Data from the Multi-angle Imaging Spectroradiometer (MISR) instrument on NASA's Terra spacecraft have been used in a groundbreaking new university study that examines the concentration, distribution and composition of aerosol pollution over the Indian subcontinent. The study documents the region's very high levels of natural and human-produced pollutants, and uncovered surprising seasonal shifts in the source of the pollution.

Larry Di Girolamo and postdoctoral scientist Sagnik Dey of the University of Illinois, Champaign, used a decade's worth of MISR data to comprehensively analyze aerosol pollution over the Indian subcontinent. This densely populated region has poor air quality and lacks on-the-ground pollution monitoring sites. The study was published recently in the Journal of Geophysical Research.

Aerosols — tiny particles suspended in the air — are produced both by natural sources, such as dust and pollen carried on the wind, and by human activities, such as soot and other hydrocarbons released from the burning of fossil fuels. They can affect the environment and human health, causing a range of respiratory problems. Aerosol pollution levels can be measured on the ground, but only the most developed countries have widespread sensor data.

Since standard satellite imaging cannot measure aerosols over land, Di Girolamo and Dey used NASA's MISR, developed and managed by NASA's Jet Propulsion Laboratory, Pasadena, Calif. MISR's unique multi-view design allows researchers to differentiate surface variability from the atmosphere so they can observe and quantitatively measure particles in the air. MISR not only measures the amount of aerosols, but can also distinguish between natural and human-produced particles.

The scientists found very high levels of both natural and human-produced aerosol pollutants. The level of atmospheric pollution across most of the country was two to five times higher than World Health Organization guidelines.

But the study also revealed some surprising trends. For example, the researchers noticed consistent seasonal shifts in human-produced versus natural aerosols. Before monsoon season begins, the winds over the Indian subcontinent shift, blowing inland instead of out to sea. These winds carry immense amounts of dust from Africa and the Arabian Peninsula to India, degrading air quality.

"Just before the rains come, the air gets really polluted, and for a long time everyone blamed the dust," Di Girolamo said, "but MISR has shown that not only is there an influx of dust, there's also a massive buildup of man-made pollutants that's hidden within the dust."

During monsoon season, rains wash some of the dust and soot from the air, but other human-produced pollutants continue to build up. After monsoon season, dust transport is reduced, but human-produced pollutant levels skyrocket, as biomass burning and the use of diesel-fueled transportation soar. During winter, seaward-blowing breezes disperse all the pollutants across the subcontinent and out to sea, where they remain until the pre-monsoon winds blow again.

"We desperately needed these observations to help validate our atmospheric models," said Di Girolamo. "We're finding that in a complex area like India, we have a long way to go. But these observations help give us some guidance."

As MISR continues to collect worldwide aerosol data, Di Girolamo says atmospheric scientists will continue to refine models for India and other areas and begin to propose new regulatory measures. The MISR data may also reveal trends in aerosol concentration over time, which can be compared with climate and health data.

For further information, read the complete University of Illinois news release at: http://www.news.illinois.edu/news/10/0907aerosol_DiGirolamo.html .