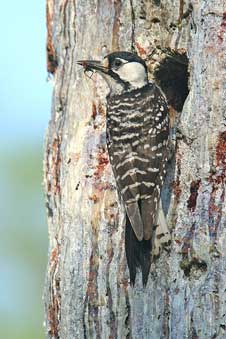 > View larger image
More than 20 years after the red cockaded woodpecker suffered population losses due in part to major destruction of a critical habitat, the longleaf pine ecosystem, during category 5 storm Hugo in 1989, the U.S. Fish and Wildlife Service continues efforts to save them. The woodpeckers, on the endangered species list for more than 2 decades, are found now in 11 southern states in the U.S. Credit: U.S. Fish and Wildlife Service Every year, hurricanes and droughts wreak havoc on human lives and property around the world. And according to a pair of new NASA-funded studies, migratory birds also experience severe impacts to their habitats and populations from these events.

While this may not seem like a revelation, the researchers were surprised to find that migratory bird species located as far as 60 miles (100 kilometers) from a hurricane’s path had experienced a long-term loss in population. Those populations took up to five years to rebound from the damage to their forest environments.

At the same time, researchers found that some migratory bird species could experience population losses as high as 13 percent when rainfall levels fall dramatically and cause drought in plains regions. The studies appear in the March edition of Global Change Biology.

"These studies suggest that whether a hurricane or a drought batters an area, migratory habits -- whether birds migrate south or stay put after breeding season -- are a strong predictor of how birds will fare," said Anna Pidgeon, an avian ecologist at the University of Wisconsin-Madison and a NASA-funded co-author of both studies.

"We believe changes in weather and climate are fundamental drivers of migration but, until now, we’ve known little of how changes in climate compel changes in migratory patterns," said Woody Turner, manager of the biodiversity program at NASA’s Headquarters in Washington. "The correlations don’t necessarily mean the environment alone is forcing migratory changes, but they offer a good place to start looking."

Pidgeon and other researchers see birds as excellent indicators of overall environmental health. Birds can give advance notice of ecosystem changes that will affect humans in time, while also telling us about the broader impacts of our actions.

Pidgeon, along with colleagues from NASA, the U.S. Department of Agriculture's Forest Service, the University of Maryland-College Park, and the University of Wisconsin-Madison, grouped 77 bird species into "migratory guilds." The guilds were based on similar migratory habits: birds that migrate long distances (to the tropics or subtropics), short distances, or reside solely in one location; breeding habitats: urban, semi-arid, or water-based habitats; the type of nests they construct; and whether they nest on or close to the ground or in tree canopies.

At the outset, researchers believed intuitively that hurricanes would cause losses among tree nesters due to a wipe-out of habitat from downed trees. That would bring gains for ground- and shrub nesters because of the increase in ground vegetation and nesting resources. 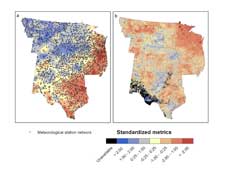 > View larger image
Data from hundreds of weather stations dotting the central U.S. in the left image illustrate the amount of rainfall estimated during a 16-week period in winter-spring 2000. Areas in red indicate a shortfall (drought) that affected bird populations more so than reduced vegetation. Red areas show less greenness – therefore less vegetation -- in the right image, a condition that prevailed in the region at the start of the year’s growing season. Credit: Tom Albright/University of Wisconsin-Madison Pidgeon’s research team examined five Gulf and Atlantic Coast areas affected by hurricanes between 1984 and 2005. They used population and diversity data from the North American Breeding Bird Survey, tracks of hurricanes, and a time-series of digital images from the NASA-built Landsat remote sensing satellite. When matched to data on breeding seasons, the scientists found that destruction of habitat correlated with varying degrees of distress on the bird species. Habitat destruction caused losses in abundance and diversity across all species in the season following hurricanes, which persisted as long as five years.

Hurricanes pose no immediate danger to bird conservation, Pidgeon believes, provided there remains ample and suitable forest habitat to which birds can shift in the aftermath of a major storm.

Grass Not Always Greener for Birds

In a separate study, Pidgeon and colleagues identified periods of drought and their subsequent impact on bird species. They started with a measure of the amount and quality of refuge for birds -- the Normalized Difference Vegetation Index (NDVI), which assesses the seasonal "greenness" of the landscape. The method involves using data from a satellite-based radiometer that measures the color of the landscape in different wavelengths according to a plant’s ability to absorb radiation. The stronger the reflectance of wavelengths off Earth’s surface, the greater density of green leaves on the ground.

When they compared this "greenness" against 15 years of precipitation data from 1,600 weather stations across the plains of North America, the team found that precipitation is a better means of forecasting bird survival during drought. "Rows of corn may be a sign of vegetation when viewed in a satellite image, but they don’t help protect birds during a drought because they’re not essential habitat," Pidgeon explained.

Whether researchers considered bird species together or in groups, according to whether they stay in an area all year versus spending the winter to the south, they always found that precipitation, rather than "greenness," was more strongly associated with species diversity and abundance.

"Satellite remote sensing is helping us see and analyze the ecological impact of these events on bird populations, as well as marine species and mammals," says climatologist Bill Patzert of NASA’s Jet Propulsion Laboratory in Pasadena, Calif. "Ultimately, however, hurricanes, drought, and other influences act as part of natural selection."