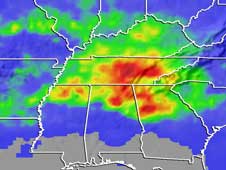 Torrential rainfall from a 2003 storm in the Southeast resulted in massive accumulations of rain (red). Similar data from NASA's TRMM satellite has revealed that more rain falls midweek. Credit: NASA
> Larger image The link between rainfall and the day of the week is evident in data from NASA's Tropical Rainfall Measuring Mission satellite, known as TRMM. Midweek storms tend to be stronger, drop more rain and span a larger area across the Southeast compared to calmer and drier weekends. The findings are from a study led by Thomas Bell, an atmospheric scientist at NASA's Goddard Space Flight Center, Greenbelt, Md. Bell said the trend could be attributed to atmospheric pollution from humans, which also peaks midweek.

"It's eerie to think that we're affecting the weather," said Bell, lead author of the study published online this week in the American Geophysical Union's Journal of Geophysical Research. "It appears that we're making storms more violent."

Rainfall measurements collected from ground-based gauges can vary from one gauge site to the next because of fickle weather patterns. So, to identify any kind of significant weekly rainfall trend, Bell and colleagues looked at the big picture from Earth's orbit. The team collected data from instruments on the TRMM satellite, which they used to estimate daily summertime rainfall averages from 1998 to 2005 across the entire Southeast. 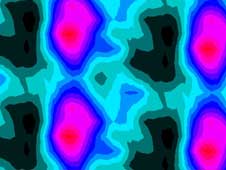 Tracking upward, this chart shows Southeast summer rain cycles of less rain (black) to more rain (red) over the period of a week, averaged from satellite data collected from 1998 to 2005. Credit: NASA
> Larger image The team found that, on average, it rained more between Tuesday and Thursday than from Saturday through Monday. Newly analyzed satellite data show that summer 2007 echoed the midweek trend with peak rainfall occurring late on Thursdays. However, midweek increases in rainfall were more significant in the afternoon, when the conditions for summertime storms are in place. Based on satellite data, afternoon rainfall peaked on Tuesdays, with 1.8 times more rainfall than on Saturdays, which experienced the least amount of afternoon rain.

The team used ground-based data from gauges, along with vertical wind speed and cloud height measurements, to help confirm the weekly trend in rainfall observed from space.

To find out if pollution from humans indeed could be responsible for the midweek boost in rainfall, the team analyzed particulate matter, the concentrations of airborne particles associated with pollution, across the U.S. from 1998 to 2005. The data, obtained from the Environmental Protection Agency, showed that pollution tended to peak midweek, mirroring the trend observed in the rainfall data.

"If two things happen at the same time, it doesn't mean one caused the other," Bell said. "But it's well known that particulate matter has the potential to affect how clouds behave, and this kind of evidence makes the argument stronger for a link between pollution and heavier rainfall."

Scientists long have questioned the effect of workweek pollution, such as emissions from traffic, businesses and factories, on weekly weather patterns. Researchers know clouds are "seeded" by particulate matter. Water and ice in clouds grab hold around the particles, forming additional water droplets. Some researchers think increased pollution thwarts rainfall by dispersing the same amount of water over more seeds, preventing them from growing large enough to fall as rain. Still, other studies suggest some factors can override this dispersion effect.

In the Southeast, summertime conditions for large, frequent storms are already in place, a factor that overrides the rain-thwarting dispersion effect. When conditions are poised to form big storms, updrafts carry the smaller, pollution-seeded raindrops high into the atmosphere where they condense and freeze.

"It's the freezing process that gives the storm an extra kick, causing it to grow larger and climb higher into the atmosphere," Bell said. He and his colleagues found that the radar on the TRMM satellite showed that storms climb to high altitudes more often during the middle of the week than on weekends. These invigorated midweek storms, fueled by workweek pollution, could drop measurably more rainfall.

The trend doesn't mean it will always rain on weekday afternoons during summertime in the Southeast. Rather, "it's a tendency," according to Bell. But with the help of satellites, new insights into pollution's effect on weather one day could help improve the accuracy of rainfall forecasts, which Bell said, "probably under-predict rain during the week and over-predict rain on weekends."