"Most of the time, the prevailing westerly winds carry the debris (ash and smoke) far to the east in the mornings, while the daily rains bring down the ash before it can go far in the afternoon," said Dennis Chesters, of the NASA GOES Project at NASA's Goddard Space Flight Center, Greenbelt, Md.

NOAA's Geostationary Operational Environmental Satellite, GOES-13, captures visible and infrared images of weather over the eastern U.S. every 15 minutes, and spotted an ash and gas cloud streaming from Mexico's Popocatepetl Volcano over the period from April 14 through April 22, 2012. The one minute, 14 second black and white video covers shows the volcano's ash mostly blowing to the southeast. NOAA operates the GOES series of satellites, and NASA's GOES Project, at NASA Goddard compiles the images into animations.

Over the course of a week, the light brown cloud of ash and smoke can be seen streaming from Popocateptl, and then the white, puffy cumulus clouds develop in the afternoon and sometimes bring rain. 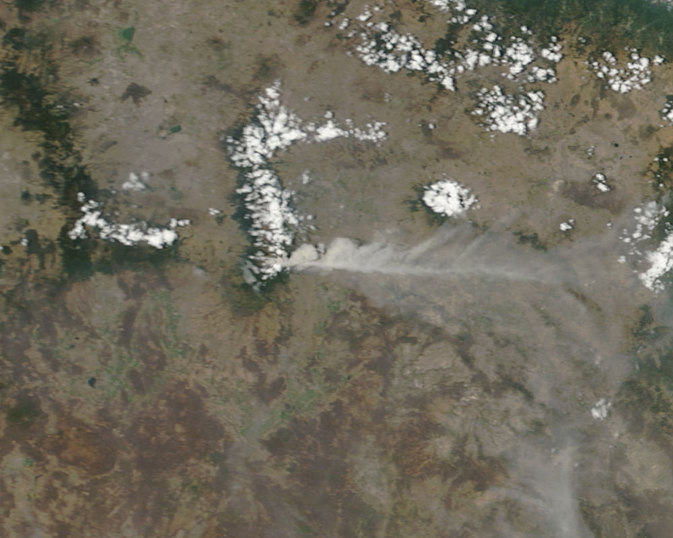 This visible image of the ash plume (light brown) from the Popocatepetl volcano in northern Mexico was captured on April 20,2012 at 16:45 UTC (12:45 p.m. EDT) from the Moderate Resolution Imaging Spectroradiometer instrument that flies aboard NASA's Terra satellite. The ash was blowing over the town of Puebla, located east of the volcano. (Credit: NASA Goddard's MODIS Rapid Response Team)
› Larger image

Popocatepetl is located about 34 miles (55 kilometers east of Mexico City. More than 30 million people live within sight of the volcano. "Popocatepetl" is the Aztec word for "smoking mountain," and is North America's second-highest volcano.

According to the U.S. Geological Survey (USGS), on April 17, the volcano's gas and ash plume reached a height of about 980 feet (~300 meters), spreading ash in the nearby town of Puebla. The Alert level at the volcano remains at "Yellow Phase Three," according to Mexico's National Center for Prevention of Disasters (CENAPRED).That alert means explosive activity could escalate, there may be growth of domes or expulsion of magma, and ash could rain on populated areas.