Grow Text SizeShrink Text Size
The Legacy of the Megaflood 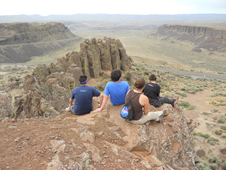 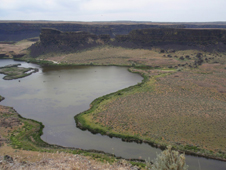 Dry Falls, a coulee carved by massive prehistoric flooding, is all that remains of what was once the largest waterfall in the world. When water flowed here more than 10,000 years ago, Dry Falls was almost 500 feet tall and nearly 4 miles wide. Credit: NASA/Goddard/Harrison Smith
› Larger image 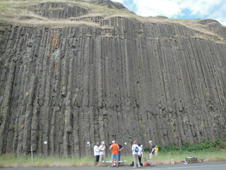 These soaring basalt columns, located just west of the town of Clarkston, Wash., is just one example of the features that make the Channeled Scablands so fascinating. Interns from Goddard's Lunar and Planetary Sciences Academy came to study these columns as an analog to similar columns recently spotted in images of Mars. Credit: NASA/Goddard/Andrew Ryan
› Larger image Ambling through the parched and scarred landscape of eastern Washington state is the 60-mile-long Grand Coulee, the largest of the stair-step canyons that give the region called the Channeled Scablands its character. Looking out over this majestic scenery, a visitor feels compelled to throw open both arms, take a deep breath, and say, "Wow! How did this get here?"

That turns out to be a deceptively simple question. It's the same one that J Harlen Bretz, a geologist from the University of Chicago, asked in 1922. And it's the question that led him to propose one of the boldest ideas in all of 20th-century geology.

A river runs through it

To the trained eye, the terraced profile of Grand Coulee's cliffs says, "Water was here." So do the crisscrossing, stream-like paths carved into the floors of many of the lesser coulees. It's no surprise, then, that geologists in the early 1900s concluded Grand Coulee had been carved by a river, probably the Columbia, slowly etching its way down through layer upon layer of dirt and rock.

That was the mainstream view when Bretz went to the Channeled Scablands in 1922 to do field studies. And his first impression of the terrain was consistent with that thinking. When he came across hills of gravel 10 stories tall, for example, he considered them terrace remnants—the remains of a riverbank that had been slowly worn away.

But the more Bretz investigated the region, the more unusual landforms he found: winding channels that split off into smaller and smaller branches, crisscrossed each other, and sometimes joined together again; here and there inside the canyons, peculiar hills shaped like the prow of a boat; fan-shaped fields of debris on the canyon floors; and more.

He began to realize that slow-acting erosion by a river could not adequately explain it all. Something sudden and much more violent was required. And the massive proportions of the scabland features, often measuring hundreds of feet, meant that whatever had formed them happened on such a gigantic scale, nothing like it had ever been seen.

The best fit for all the evidence, Bretz concluded, was a catastrophic flood. This hypothesis was so contrary to the collective wisdom of hundreds of years of geology, however, that even Bretz doubted it at first.

The key to the past

The slow, steady action of erosion was quite familiar to geologists of Bretz's day. Eons worth of its handiwork could be seen worldwide, and geologists were busily observing the process in full swing. Thus, erosion fit nicely with "the present is the key to the past," a phrase that had practically been the slogan of geologists since being coined in the 1830s by Charles Lyell, one of the founders of modern geology.

Lyell, a mentor of Charles Darwin, considered it important to anchor geology in a solid philosophical framework. "Geology is, after all, about things that happened in the past, and we don't have direct access to that," says the University of Arizona's Victor Baker, an expert on the subject of water on prehistoric Earth and Mars. "Lyell said that if we observe the processes operating today, we can put the interpretation of events that happened in the past on a more secure footing."

The foundation for this thinking, called uniformitarianism, had been laid in the late 1700s by the Scottish scientist James Hutton. Hutton turned the tables on the popular view that world had been shaped in just a few thousand years by catastrophic events. On the contrary, he argued, geological processes work slowly and methodically, so Earth had to be ancient.

For more than a century, geologists looked at the world this way. So in 1923, the community was not at all prepared for Bretz to propose that the main architect of the Channeled Scablands had not been a methodical, slow-acting river but a mysterious, cataclysmic and previously unheard of deluge, which he named the Spokane Flood.

(Continues after the slideshow)

If Bretz was right, however, the branching and reconnecting channels he saw in the Channeled Scablands were evidence of water tearing into a landscape whose river valleys were overwhelmed by the huge volume. The "noses" of the prow-shaped hills pointed in the direction of the massive flow. And the huge piles of gravel marked spots where the raging waters had slowed enough to shed some of their load. A flood provided the kind of simple, all-encompassing explanation often praised by scientists as "elegant."

This time, though, it was greeted with doubt bordering on outrage. The "'heresy must be gently but firmly stamped out'," is how Baker cites Bretz summing up his colleagues' reaction.

"Bretz met with a lot of resistance," says Brian Jackson, a planetary scientist who helped lead a field trip to the scablands for the interns of the Lunar and Planetary Sciences Academy (LPSA) at NASA's Goddard Space Flight Center in Greenbelt, Md. "Bretz was practically ambushed by skeptics at a meeting in 1927. But if you read the history, most of the criticism wasn't coming from geologists who had reached different conclusions by studying the region. Most of it came from a sense that Bretz was violating the concept of uniformitarianism. In other words, the flood couldn't have happened because geologists had never recorded anything like it."

A related objection was that rivers don't behave the way Bretz was suggesting. Baker concedes that this is true in a sense. "Normal rivers don't," he says. "But Bretz was not talking about a normal river."

"We think this was the largest flood ever to have occurred on our planet," says Patrick Burkhart, a geologist from Slippery Rock University in Slippery Rock, Penn., and one of the researchers who accompanied the LPSA interns. "The scale was almost unearthly, practically impossible to imagine and describe."

The story of this "megaflood" would be fleshed out over the next several decades by a host of researchers, including Baker. Geologists would learn that the waters could have drowned a 40-story skyscraper, making them 20 times deeper than the Hurricane-Katrina-triggered flooding that destroyed swaths of New Orleans and the Gulf coast in 2005. Computer modeling would reveal that in the upper Grand Coulee, water charged over the cliff now called Dry Falls at the highway speed of 65 miles per hour. Dry Falls would be recognized as the largest waterfall to have existed on Earth, carrying 10 times as much water as all modern rivers combined.

One key to piecing everything together would be the realization that what appear to be rolling hills in part of the scablands are actually giant ripple marks left by the water's currents. "These are like the ripple marks you might see when you're swimming in the ocean, looking down at the sandy bottom," explains Andrew Ryan, who was the student coordinator for the LPSA field trip and is now in graduate school at Arizona State University in Tempe. "Except those ripple marks are 3 or 4 inches tall. The ones in the Channeled Scablands are 30 feet tall."

To Bretz's colleagues, the Spokane Flood seemed all the more incredible because he could not identify a source for the waters.

The best candidate seemed to be the Cordilleran Ice Sheet, which had covered British Columbia and parts of Montana, Idaho, Washington and Alaska during the last ice age. "But Bretz himself said that the ice sheet couldn't have melted fast enough to produce the necessary amount of water under normal conditions," explains Baker.

Sudden melting might have been possible, Bretz suggested, if there had been volcanic activity under the ice sheet. "By the way, that's not a dead idea," Baker notes. "We still don't know if volcanism under the ice sheet could have been a source for the flooding." But the proposal got no traction at the time because Bretz could find no evidence of such activity.

Bretz defended his source-less flood for five years and then, in 1928, made the case that the origin did not lie to the north in main part of the Cordilleran Ice Sheet, as assumed, but to the east. His nominee was Glacial Lake Missoula, a prehistoric lake that formed in Idaho after an offshoot of the Cordilleran sealed the Clark Fork River with a 2,000-foot-tall wall of ice.

Though that wasn't an obvious choice, it wasn't outrageous. Some researchers began to think Bretz was on to something, and by the mid-1930s, he had gathered enough support that the river-versus-flood question was considered an open one.

The evidence for Glacial Lake Missoula's existence had been put together by J. T. Pardee, a U.S. Geological Survey researcher who had also studied the Channeled Scablands. A year before Bretz's first scablands paper, Pardee had published his own preliminary findings about the region. Like Bretz, Pardee suspected flooding, and the two researchers had even corresponded. But Pardee kept a low profile until quite late in the Spokane Flood debate.

The scale finally tipped in Bretz's favor during a conference in 1940. That's when Pardee demonstrated that Glacial Lake Missoula had amassed as much water as Lake Ontario and Lake Erie combined—a stockpile big enough to send a flood surging all the way from Montana to the Pacific Ocean. He explained that the evenly spaced, sandbar-like gravel hills in northwestern Montana were actually ripple marks left on the lake's bottom by the currents. (In fact, ripple marks from the flood can be found as far as Portland, Ore.) And he left the door open for Bretz to make the connection that an abrupt failure of the ice dam had unleashed the glacial water, turning a vast plain of hardened lava into the Channeled Scablands.

With that, most of the objections to the flood hypothesis were laid to rest. These days, researchers think that as many as 40 floods—some enormous, others just darn big—shaped the scablands. Whether all of the floods originated in the Cordilleran Ice Sheet is still being discussed.

"Our whole understanding of catastrophic processes has changed as a result of that work," says Baker. "Now we know that many geologically interesting places, including the English Channel, were formed by floods. And it doesn't only happen on Earth. Mars has outflow channels that are seen as evidence of catastrophic floods."

To read more about how this research relates to Mars exploration, click here:
http://www.nasa.gov/topics/solarsystem/features/mars-honeycomb.html