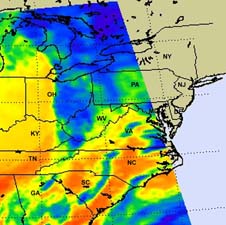 This infrared image from the AIRS instrument on NASA's Aqua satellite on June 1 at 18:53 UTC (2:53 p.m. EDT) shows the center of the most intense activity over West Virginia. That area appears to have cloud top temperatures between -27F and -45F, and the cloud tops are between 4.6 and 5.6 miles high. Credit: NASA/JPL, Ed Olsen
› Larger image 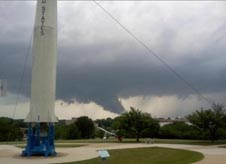 Around 6:20 p.m. EDT on Friday, June 1 as severe weather continued in Maryland, the tornado that touched down near Fort Meade, Md. was photographed from Greenbelt, Md. This image was taken from the rocket garden behind the NASA Goddard Visitor's Center. Credit: WJZ-TV, Baltimore, Md.
› Larger image 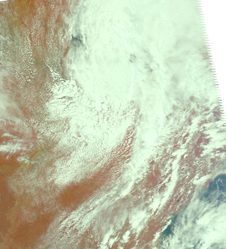 Aqua passed over Maryland on June 1 around 18:53 UTC (2:53 p.m. EDT) and AIRS captured data on temperature and cloud heights. In this "near infrared" image, which appears like a visible image, it shows the extent of the cloud cover associated with the system. The near infrared image is created from four NIR channel radiances around 4 micron wavelength. Credit: NASA/JPL, Ed Olsen
› Larger image 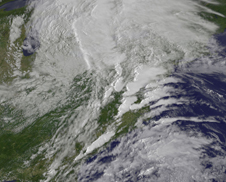 NOAA's GOES-13 satellite captured a visible image of the severe weather outbreak when tornadoes were touching down around Maryland on June 1. This image was taken at 2215 UTC (6:15 p.m. EDT). The clouds that appear almost flat and positioned from southwest to northeast included the severe storms. The image was created by the NASA GOES Project at NASA Goddard. Credit: NASA GOES Project
› Larger image On Friday, June 1, 2012 severe weather generated 9 weak tornadoes across Maryland, according to the National Weather Service. As the system that generated them approached, NASA's Aqua satellite gathered information about power behind it. NASA also created an animation of the severe weather as it was seen from NOAA's GOES-13 satellite.

The Atmospheric Infrared Sounder (AIRS) instrument that flies aboard NASA's Aqua satellite provided both a visible and an infrared look at the severe weather that moved into Maryland on June 1 and generated an astounding number of tornadoes – nine in all.

Aqua passed over Maryland on June 1 around 18:53 UTC (2:53 p.m. EDT) and AIRS captured data on temperature and cloud heights. The infrared imagery showed that the major activity was located in West Virginia and heading eastward toward Maryland. When cloud temperatures get colder, it means that clouds are getting higher. Building clouds indicate a lot of "uplift" in the atmosphere and stronger thunderstorms.

Ed Olsen of the AIRS Team at NASA's Jet Propulsion Laboratory, Pasadena, Calif. said that the AIRS imagery showed "The center of most intense activity over West Virginia appears to have cloud top temperatures between -27 and -45 Fahrenheit (-33.1 and -43.1 Celsius / 230 and 240 Kelvin), meaning that the cloud tops (assuming U.S. Standard Atmosphere) are between (4.6 and 5.6 miles) 7.5 and 9 kilometers high."

The data from the AIRS instrument is also used to create an accurate 3-D map of atmospheric temperature, water vapor and clouds, all of which are helpful to forecasters.

NOAA's GOES-13 satellite was providing real-time visible imagery of the severe weather outbreak when tornadoes were touching down around Maryland on June 1. The NASA GOES Project, located at NASA's Goddard Space Flight Center in Greenbelt, Md. combined the GOES imagery to create an animation of the severe weather outbreak. The animation that runs almost eight seconds shows the movement of the severe storms from 1:45 p.m. to 7:45 p.m. EDT (1745 UTC to 2345 UTC). The colorized full resolution uses the GOES visible data of the clouds, overlaid on a U.S. map created by imagery from the Moderate Resolution Spectroradiometer instrument (MODIS), an instrument that flies onboard both the NASA Aqua and Terra satellites.

The animation shows a cold front approaching from the west spawned severe storms along the U.S. East Coast, including 9 weak tornadoes in Maryland around sunset. From the GOES viewpoint, all that surface action is covered by cloud tops.

Baltimore Meteorologist Justin Berk compiled a listing of the individual tornadoes. The ten tornadoes include: An EF-1 tornado with 90 mph winds in Pleasant Hills, Harford County; An EF-0 tornado started near Fort Meade and moved to BWI Marshall Airport; another tornado (not rated yet) in Gamber, Carroll County; an EF-O in Centreville in Queen Anne's County, Md. ; Two possible EF-0 tornadoes in Damascus, Montgomery County; An EF-0 at Springdale, Prince George's County (just outside the Washington, D.C. beltway); An EF-1 touched down in Watersville, Howard County; another EF-0 tornado touched down in Mount Airy in Carroll County; and another tornado (not yet rated) made an appearance in Simpsonville, Howard County.

For the complete listing of tornado reports, visit: