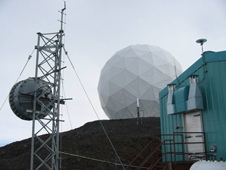 McMurdo Ground Station radome as seen from Building 71 at McMurdo Station. Credit: Seth White
› Larger image What are you doing for the holidays this winter? Spending time with family and friends?

More than a dozen Near Earth Network engineers and support personnel from NASA’s Goddard Space Flight Center in Greenbelt, Md., and Wallops Flight Facility in Va., will be packing their bags and spending their holidays far away from their families at McMurdo Station, Antarctica, for the austral summer.

McMurdo Station is one of three permanent National Science Foundation (NSF) stations in Antarctica. At McMurdo Station, which is the main U.S. station in Antarctica and 850 miles (1,360 km) north of the South Pole, the mean annual temperature is 0 F (-18 C). Temperatures can reach 46 F (8 C) in the austral summer and -58 F (-50 C) in the austral winter. The average wind is 14 miles per hour, but winds have exceeded 115 miles per hour.

The team will perform crucial upgrades and maintenance activities to the NASA Near Earth Network at McMurdo Ground Station in support of European Space Agency’s latest meteorological satellite, MetOp, which launched in October 2006. MetOp-A is the first in a series of three European meteorological operational satellites procured by ESA to serve as the space segment of the European Organisation for the Exploitation of Meteorological Satellites' EUMETSAT Polar System. Under a memorandum of agreement between NASA and the National Oceanic and Atmospheric Administration, the McMurdo Ground Station’s support will begin in March 2011 and also will support MetOp-B and C over the next 15 years.

In collaboration with the NSF, NASA owns and operates a single 10-meter antenna, hidden inside the radome in this photo, and associated electronics equipment that has provided countless hours of space-to-ground communications support to dozens of Expendable Launch Vehicles and polar-orbiting satellites owned by NASA, other government agencies and international partners.

In addition to having a station at McMurdo, the Near Earth Network combines other NASA-owned stations with services purchased from commercially owned stations to provide support to a long list of missions.

Goddard engineer Kevin McCarthy will lead this effort, providing project oversight and coordination with the National Science Foundation. In addition to reporting to Goddard and the Space Communications and Navigation Program on day-to-day activities and status, he will be the primary blogger for the Near Earth Network McMurdo upgrades while in Antarctica.

“I’m looking forward to my departure on Nov. 6 and my scheduled return home on Feb. 5, 2011, as well as sharing my team’s experiences with you on our work and life at McMurdo,” reports McCarthy.

The Near Earth Network is the latest NASA project to join the rising trend of blogging on day- to-day activities as part of NASA’s blog website under the title of “Summer on the Ice,” which will be updated regularly with news and photos of the site upgrades.