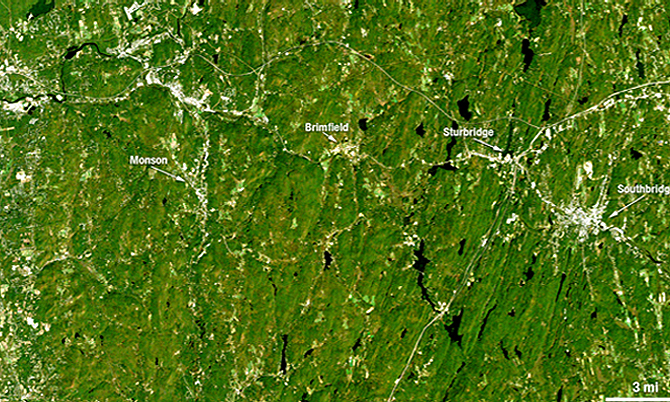 This is a Landsat 5 satellite image of the area between Springfield and Sturbridge, Mass. taken on October 8, 2010, where the tornado made a track on June 1, 2011. Credit: NASA/USGS, Mike Taylor
After 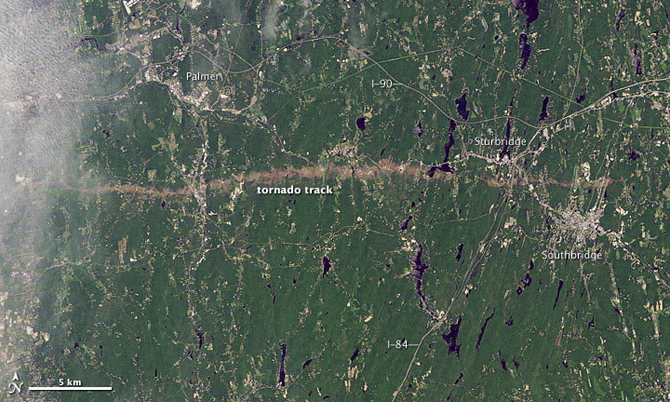 This is a Landsat 5 satellite image of the area between Springfield and Sturbridge, Mass. taken on June 5, 2011 that clearly shows the light-colored tornado track. Credit: NASA/USGS, Earth Observatory/Jesse Allen

Satellites provide a lot of useful information and the Landsat 5 satellite captured an image of the long damage track created on June 1, 2011 when a tornado tracked from Springfield to Sturbridge, Mass. An earlier image is now available from 2010 that enables people to more clearly see the damage path the June 2011 twister created on its eastward track.

A Landsat 5 satellite image from October 8, 2010 has been released from NASA and the U.S. Geological Survey that shows the area between Springfield and Sturbridge, Mass. where the tornado touched down.

Emergency managers and land managers have contacted NASA and have been using Landsat imagery to determine the tornado's damage path, and help assess what areas have been affected.

The Springfield tornado touched down on June 1, 2011, from a supercell thunderstorm that developed over western Massachusetts. The movement of that storm system was captured in an animation by the Geostationary Operational Environmental (GOES-13) satellite. NASA's GOES Project created the animation from the NOAA managed satellite, and it shows the bubbling up of thunderstorms that possibly spawned the tornadoes.

The supercell thunderstorm produced an EF3 tornado that cut a 39-mile (63-kilometer) track of destruction across southwest and south-central Massachusetts. The tornado remained on the ground for many miles and widened to 0.5 miles (0.8 kilometers), making the path on satellite imagery more obvious.

Landsat 5's Thematic Mapper captured a natural-color image on June 5, 2011 that clearly showed the tornado track, especially when compared with the image from 2010. The after image shows part of the tornado track, including damage in Sturbridge. A tornado was reported on the ground in Sturbridge at 5:22 p.m. according to the Boston Globe newspaper.

To see an animation of GOES-13 satellite imagery of the storms that spawned the tornadoes, go to: