The merging of two low pressure areas into a large Nor'easter on March 6 brought winter weather advisories and warnings to the Mid-Atlantic. NASA's Aqua satellite captured an infrared and near infrared image of the storm's power, and NASA created an animation of the storm's movement using NOAA's GOES-13 satellite imagery. 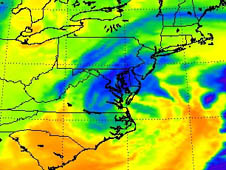 This false-colored infrared image of the Nor'easter from March 6 at 1817 UTC was created from data from the AIRS instrument aboard NASA's Aqua satellite. The dark blue and purple areas indicate the coldest cloud top temperatures with the heaviest precipitation.
Credit: NASA JPL, Ed Olsen
› Larger image

Infrared data from the Atmospheric Infrared Sounder (AIRS) instrument aboard NASA's Aqua satellite was made into a false-colored image of the Nor'easter from March 6 at 1817 UTC (1:17 p.m. EST). Infrared imagery shows temperature data. The coldest cloud tops indicate the highest storm clouds, and the strongest convection. The coldest cloud top temperatures were near -45 Fahrenheit ( -43 Celsius), and were areas with the heaviest precipitation. At the time of the image, the coastal low pressure area's heaviest precipitation stretched over New Jersey, southeastern Pennsylvania, most of Maryland, Delaware, and eastern and northeast and central Virginia. Other areas of very cold cloud tops and heavy precipitation appeared over the Atlantic in the storm's arm, east and south of the center of circulation.

An animation of NOAA GOES-13 satellite imagery over the days of March 5, 6 and early on March 7 was created by the NASA GOES Project at NASA's Goddard Space Flight Center in Greenbelt, Md. The 24 second animation showed the progression of a cold front from the west associated with a low pressure system that brought snow from Chicago to the Appalachian Mountains. The low merged with a coastal low near the Mid-Atlantic on March 6 and brought up to 2 feet of snow in the Blue Ridge Mountains, while coastal areas and cities including Washington, D.C. and Baltimore received snow followed by heavy rain. The animation ends at 1331 UTC (8:31 a.m. EST) on March 7, when the nor'easter was affecting New England.

After the cold front and associated low that swept in from the Upper Mid-west merged with the coastal low pressure area, the coastal low pressure area became the driver. It brought in warmer temperatures from the Atlantic Ocean where sea surface temperatures were in the 40s (Fahrenheit). The warmer air helped keep the precipitation as rainfall in a line from Baltimore and Washington, D.C. eastward. It was the higher elevations in the Mid-Atlantic that saw the most snow.

The strong winds that accompanied the nor'easter did cause wind warnings and advisories. According to the Baltimore Sun newspaper the winds toppled a tractor trailer truck on Maryland's Bay Bridge that connects to Annapolis. The bridge was closed for four hours. The winds caused tree damage and power outages in Maryland and Delaware. In western northern Virginia and western Maryland winds coupled with heavy, wet snow took down trees and left thousands without power. Rob Gutro
NASA's Goddard Space Flight Center,Greenbelt, Md.
› Back To Top