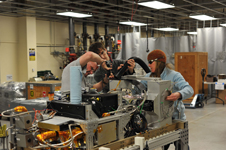 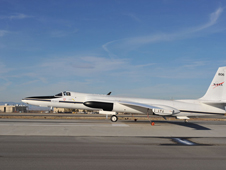 On Dec. 7, 2010, the ER-2 lifts off with MABEL from NASA's Dryden Flight Research Center in Palmdale, Calif., headed for a forested region in the Sierras. NASA scientists have previously measured tree heights and ground topography here, which will be used to better understand what MABEL "sees" from the sky. Credit: NASA/MABEL
› Larger image

› View a related gallery of these and other mission pictures. Flying at the edge of space, a pilot wearing high-altitude flight gear maneuvered the ER-2 aircraft last month over the California desert. At 12 miles above the ground the temperature outside had plummeted to -70 F (-56 C) and air pressure dropped to only five percent of that at the surface. But the altitude was key: measurements made earlier this month from the aircraft mimicked what NASA will one day measure from space.

The star of this high-altitude show was a small, boxy instrument -- the Multiple Altimeter Beam Experimental Lidar (MABEL) -- tucked snugly inside the aircraft's nose. In an effort led by the instrument team from NASA's Goddard Space Flight Center in Greenbelt, Md., MABEL made five flights last month to measure surface elevation over a series of targets across the U.S. Southwest.

The successful flights are welcome progress for the Goddard Cryosphere Branch's next major satellite mission, the Ice Cloud and land Elevation Satellite-2 (ICESat-2). Scheduled for launch in January 2016, ICESat-2 is the follow-on to the first ICESat, which from 2003 until 2009 used laser altimetry measure Earth's surface and atmosphere in unprecedented detail. Scientists have used ICESat data to determine changes in the mass of the Greenland and Antarctic ice sheets, polar sea ice thickness, vegetation-canopy heights, and the heights of clouds and aerosols. Resuming spaceborne coverage is critical for maintaining a comprehensive view of changes to polar ice, as well as vegetation and clouds.

MABEL will never fly in space; rather, her work high in the atmosphere provides the foundation for future ICESat-2 science. The flights proved that the measurement technique selected for ICESat-2 -- which employs a newer type of laser altimetry -- indeed works at a high altitude.

"The instrument scientists are happy because, to a first order, we can see the ground in the raw MABEL data," said Kelly Brunt, a polar scientist from Goddard who was in the field as a science liaison for flight planning.

After MABEL data are processed, researchers can also use them to validate and calibrate data from other airborne missions, such as IceBridge, and ultimately, ICESat-2.

"The density of data collected is astounding, and will allow us to characterize what we see from space," said Thorsten Markus, project scientist for Goddard's ICESat-2 and head of the Cryosphere Branch at NASA Goddard.

It took just one year and $2 million for the MABEL team at Goddard, led by ICESat-2 instrument scientist Matt McGill, to pull the instrument together, from concept to design, procurement and assembly to the first successful flights in December 2010.

"Why did I agree to take on this challenge?" McGill asked. "I knew the technique would work."

Here's a breakdown of MABEL's maiden voyage: One, Two, Three …

The technique is photon counting, which is a type of laser altimetry that measures distance using individual photons. Unlike conventional laser altimetry, which uses millions of photons to make a single distance measurement, photon counting precisely records the time of flight of individual photons as they travel from MABEL, reflect off of the Earth’s surface, and are detected as they come back to MABEL.

The keys to photon counting are the very sensitive detectors capable of detecting individual photons, and the precise timing of photon travel. Photons reflected off of mountains return to MABEL sooner than photons reflected from valleys, allowing scientists to measure the elevation of Earth's surface.

McGill and colleagues have been working with the photon counting technique for about 10 years, on instruments such as the Cloud Physics Lidar (CPL). CPL can resolve elevation to about 30 meters (~98 feet), which is sufficient for atmospheric measurements. Applying the technique to MABEL, a joint undertaking between NASA and Sigma Space, scientists can resolve elevation differences to about 2 centimeters (~0.8 inch). When used on ICESat-2, the resolution will be 10 cm (~ 4 inches) or better over most surfaces -- an impressive feat from space.

The finer resolution better equips scientists to detect surface changes. Such detail is valuable, particularly at Earth's poles where scientists are interested in tracking changes of the ice, which plays a role in global climate and sea level rise.

Brunt and colleagues carefully selected a range of science targets chosen to help test MABEL, and to better understand how ICESat-2 will measure different landscapes.

"It's important to note that we flew this instrument for five consecutive days, uninterrupted by instrument issues or aircraft issues," Brunt said. "This massive success is a credit to Matt McGill's instrument team at Goddard, engineers at Sigma Space, and the flight crews at Dryden."