Arctic 'Melt Season' Is Growing Longer, New Research Demonstrates
New NASA-led research shows that the melt season for Arctic sea ice has lengthened by an average of 20 days over the span of 28 years, or 6.4 days per decade. The finding stems from scientists' work to compile the first comprehensive record of melt onset and freeze-up dates -- the "melt season" -- for the entire Arctic. 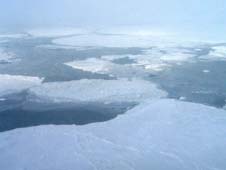 > Larger image
Arctic sea ice has been facing longer melt seasons, according to a new study. Credit: NASA/Thorsten Markus The melt season begins each April when the sunless winter gives way to sunrise and spring, and water and air temperatures rise. By September, the sea ice shrinks to a minimum and begins refreezing, bringing the annual melt season to an end.

The longer melt season, described by Thorsten Markus of NASA's Goddard Space Flight Center in Greenbelt, Md., in the Journal of Geophysical Research -- Oceans, has implications for the future of Arctic sea ice. Open water that appears earlier in the season absorbs more heat from the sun throughout summer, further warming the water and promoting more melting. 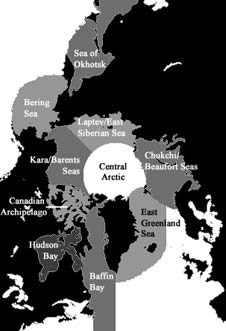 "Given that the Arctic ocean is nearly twice the size of the continental United States, it would be impossible to track change like this without long-term satellite records," said Thomas Wagner, NASA's cryosphere program scientist at NASA Headquarters, Washington.

Analyzing melt-season trends for 10 different Arctic regions, the research team discovered that melt season lengthened the most -- more than 10 days per decade -- in Hudson Bay, the East Greenland Sea, the Laptev and East Siberian Seas, and the Chukchi and Beaufort Seas. Some of that change is due to melt onset occurring about three days earlier per decade in some areas. Earlier melt means more heat can be absorbed by the open water, promoting more melting and later freeze-up dates -- more than eight days per decade later in some areas. Only the Sea of Okhotsk turned up a shorter melt season. The reasons for the regional differences are currently being investigated.

"The onset of melting and melt season length are important variables for understanding the Arctic climate system," Markus added. "Given the recent large losses of the Arctic summer ice cover, it has become critical to investigate the causes of the decline and the consequences of its continued decline."

The lengthened melt season could impact more than just the Arctic ice and ocean. According to Markus, "marine ecosystems are very sensitive to changes in melt onset and freeze-up dates." 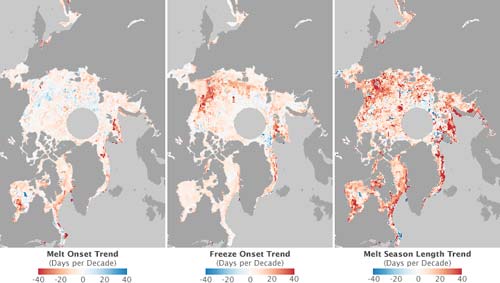 > Larger image
Between 1979 and 2007, Arctic sea ice has begun melting (left map) an average of 2.8 days per decade earlier in the spring, and has begun re-freezing (center map) an average of 3.7 days per decade later in the autumn. Altogether, the length of the Arctic melt season (right map) has increased by about 20 days over the past 30 years. These maps are based on satellite observations of microwave energy radiated from the surface of sea ice. Credit: NASA images by Robert Simmon, based on data from Jeffrey Miller and Thorsten Markus.

"Changes in the Arctic sea ice cover may have profound effects on North America’s climate," said Wagner. "Studies like this one show us how ice responds to variations in the ocean and atmosphere and improve the predictive models that will help us plan for climate change."