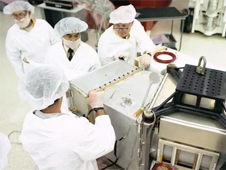 > Watch video on Landsat 5's anniversary
Credit: NASA's Goddard Space Flight Center 132,969 ... 132,970 ... 132,971. Like a trusty watch counting up the minutes, the Landsat 5 satellite keeps on ticking, orbit after orbit around Earth. Well beyond its design lifetime of 15,000 orbits, the satellite's trajectory could go askew or its instruments could malfunction at any moment.

Still observing the Earth after 25 years -- 22 beyond its three-year primary mission lifetime -- Landsat 5 collects valuable scientific data daily. Some attribute the satellite's longevity to over-engineering. Others say it's a long run of good luck. Whatever the reason, no one who attended the satellite's March 1984 launch could have expected it would still be working today.

Landsat 5 is one of seven satellites in the Landsat Program, designed, built and launched by NASA, and operated by the U.S. Geological Survey (USGS). Only Landsat 5 and 7 are still operational. With the launch failure of the privately built Landsat 6 in 1993 and the launch of Landsat 7 in 1999, scientists would have had a 12-year gap in observations if Landsat 5 had only lasted for its primary mission lifetime.

"Such a gap would have been a scientific disaster," said Darrel Williams, Landsat project scientist at NASA's Goddard Space Flight Center, Greenbelt, Md. Continuity is important because it's only through consistent observation that scientists can clearly identify human impacts on Earth and natural changes. 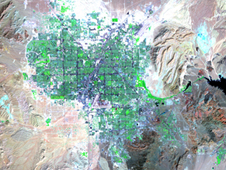 Las Vegas, pictured here, has gone through a massive growth spurt during Landsat 5's 25 years. Credit: NASA/USGS
> View "25 Years of Landsat 5" image gallery "The images derived from Landsat are like a family photo album," he added. "Just as we change over time, so, too, does Earth's surface."

Since 1972, a Landsat satellite has collected hundreds of thousands of digital images for the planet's photo album. The "sun-synchronous" orbit guarantees that each Landsat spacecraft will observe the same location on Earth at the same time of day every 16 days, making it easy to observe changes. Landsat 5 alone has gathered more than 700,000 images.

Those images are much more than pretty pictures. They provide robust scientific information about a changing planet.

The Thematic Mapper (TM) instrument on Landsat 5 was built in the late 1970s with a resolution fine enough to resolve blocks of land about 100 feet wide per pixel -- at a time when most people didn't know what a pixel was. It was a second-generation imaging instrument in the Landsat program, flying alongside and eventually surpassing the older Multispectral Scanner System (MSS), which had a resolution of about 250 feet.

TM cannot resolve individual houses or trees, but it can see areas where houses have been constructed or forests have been cleared. If the resolution were any finer, Landsat might not have been able to capture large-scale land changes. The satellite's resolution has been called "just-right" by Earth systems scientists.

"The data provided by the Landsat series of satellites over the past 35 years are among the most valuable scientific assets available to the Earth science research community," Williams noted. "These data provide the most consistent, reliable documentation of global land-cover change ever assembled." 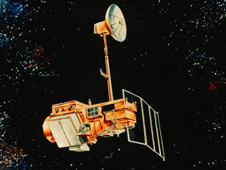 An early depiction of Landsat 5. Credit: NASA Landsat 5 has charted urban growth in Las Vegas, monitored fire scars in Yellowstone National Park, and tracked the retreat of a Greenland glacier. Data from the satellite turns up frequently in scientific literature, and should continue to do so, particularly now that the images are available free of charge or copyright.

Beyond observations of change, the individual, static images have also proven useful in unforeseen ways. Cell phone companies -- most of which did not even exist when the satellite was launched -- now use Landsat images to scout the best locations for cell towers. Pilots in training see Landsat images when they enter a flight simulator. The Landsat catalog provides the backbone of Google Earth. The list goes on.

"Landsat is no longer an experiment," Williams said. "It is a fundamental part of the country's infrastructure."

The Mother of Invention

The circumstances that have kept Landsat 5 orbiting long enough to celebrate its 25th anniversary are part engineering ingenuity and part luck.

Engineers originally designed Landsat 5 to be retrievable by the space shuttle, so they added an auxiliary fuel tank to allow the satellite to meet the shuttle half-way during a rendezvous. When the idea of shuttle retrieval was scrapped, Landsat 5 found itself with a bounty of extra fuel, which it has used to maintain its orbiting altitude of 705 kilometers (438 miles).

The quarter-century in space, however, has been rough on the satellite and its instruments. "If you created a cartoon of Landsat 5, it would look like a mummy wrapped in bandages," Williams said, "with only a small hole for the instrument's 'eye' to look down at Earth."

All of those "bandages" have been applied remotely through quick thinking and innovation by engineers who have worked around and adapted to at least 22 mission anomalies. For instance, Landsat 5 has no on-board data recorder to capture acquired data for later downlink; everything must be relayed to ground antennas in real time.

"We've lost batteries, star trackers, Earth sensors, skew wheels -- all of which have been overcome through engineering and operational workarounds," said Steven Covington, a flight systems manager for Landsat 5 and 7 and an employee of the Aerospace Corporation at NASA Goddard.

"The notion that certain component failures will mean the demise of a mission is wrong," Covington said. "From an engineering standpoint, necessity has been the mother of invention."

The Landsat 5 and Landsat 7 satellites have proven to be resilient. Refined projections of fuel usage computed by USGS suggest that Landsat 5 and Landsat 7 could have sufficient fuel to operate at least through 2012, exceeding previous expectations. The next NASA land surface imaging mission is called the Landsat Data Continuity Mission and is scheduled for launch in December 2012.