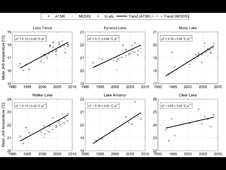 Recent climate variability is causing a number of large lakes in California and Nevada to warm rapidly, according to a new NASA study.

Thermal infrared imagery from NASA's Moderate Resolution Imaging Spectroradiometer on board NASA's Terra and Aqua satellites and from the European Space Agency's series of Along-Track Scanning Radiometers were used to quantify changes in the thermal behavior of six large lakes in California and Nevada (Lake Tahoe, Mono Lake, Pyramid Lake, Walker Lake, Lake Almanor, and Clear Lake). The results found that between 1992 and 2008, the average nighttime temperatures of these lakes during the months of July, August and September increased at an average rate of 0.11 Kelvin (0.2 degrees Fahrenheit) per year. Results were validated against direct, ground measurements made at Lake Tahoe, on the California/Nevada border. Such rapid warming is expected to have a significant impact on lake ecosystems.