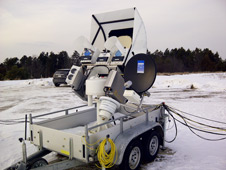 › Larger image
The University of Bonn ADMIRARI Radiometer deployed at the CARE site. This instrument measures microwaves that are naturally emitted from Earth's surface to determine water vapor and cloud and liquid water in the air column. Credit: NASA / Walt Petersen Predicting the future is always a tricky business -- just watch a TV weather report. Weather forecasts have come a long way, but almost every season there's a snowstorm that seems to come out of nowhere, or one that's forecast as 'the big one' that turns out to be a total bust.

In the last ten years, scientists have shown that it is possible to detect falling snow and measure surface snowpack information from the vantage point of space. But there remains much that is unknown about the fluffy white stuff.

"We're still figuring out how to measure snow from space," says Gail Skofronick-Jackson, a specialist in the remote sensing of snow at NASA's Goddard Space Fight Center, Greenbelt, Md. "We're where we were with measuring rain 40 years ago."

Skofronick-Jackson is part of a team of scientists from NASA and Environment Canada who are running a large experiment in Southern Ontario to improve snow detection. Their GPM Cold-season Precipitation Experiment (GCPEx) supports the new Global Precipitation Measurement (GPM) mission whose Core satellite is scheduled to launch in 2014.


GPM Deputy Project Scientist Gail Skofronick-Jackson tells us about the science of falling snow and what the GPM mission will do to study this critical component of the Earth's water cycle. Credit: NASA

GPM is an international satellite mission that will unify and set new standards for precipitation measurements from space, providing the next-generation observations of rain and snow worldwide every three hours.

As part of their snow detection efforts, the GCPEx science team is collecting as much data as they can to improve understanding of snow dynamics inside clouds, because they relate to how snow moves through Earth's water and climate cycles.

Accurate snowfall measurements are important for more than just weather forecasts. Snow is one of the primary sources of water in mountainous regions. For example, the snow pack on the Sierra Nevada Mountains accounts for one-third of the water supply for all of California. The snowmelt that enters the water cycle in spring and summer provides both drinking water and irrigation for California's $37.5 billion dollar agricultural industry. Droughts and climate change are making the snow pack a shrinking water resource, and managers have a greater need than ever to know exactly how much water is locked in snow.

But to know that, scientists first have to know just how much water snow carries as it falls to the ground. 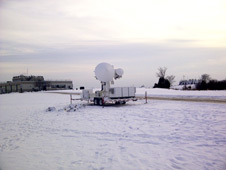 › Larger image
The NASA D3R radar deployed at the CARE site. This radar scans the air column for snow falling from the clouds to the ground. Credit: NASA / Walt Petersen Rain vs. Snow

Figuring out how much water comes down as snow first requires being able to tell snow from rain. On the surface, it's obvious, rain is liquid and wet, snow is solid and frozen. But rain and snow often happen at the same time or snow can melt into rain.

To tell the difference between rain and snow from space, scientists use an instrument called a microwave radiometer. It works by measuring the microwaves that naturally radiate from Earth all the time. Different natural phenomena radiate at different frequencies. For example rain causes a response at lower frequency microwaves while falling snow affects higher frequency microwave measurements. A radiometer, like a car radio picking up different stations, picks up responses at different frequencies and thus distinguishes between rain and snow. The signal gets stronger for heavy rain or intense snow rates.

Currently radiometers on some satellites can tell the difference between rain and snow – but only to a point. Complications occur where the frequencies respond to both liquid rain and falling snow or even to the Earth’s surface, says Skofronick-Jackson. "There's a mixed response in those channels, so you kind of have to know what you're looking at."

In those overlapping frequencies, what distinguishes rain from snow is temperature, size and shape, a current unknown in most precipitation detection.

"What we know about rain is that raindrops are spherical or slightly flattened spheres. So they all basically have one shape," says Skofronick-Jackson. "With snow we have so many different shapes." 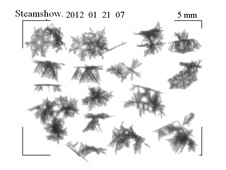 › Larger image
This image of falling snowflakes was taken by the Snow Video Imager (SVI) at one of the auxiliary ground sites, the Steamshow Fairgrounds, 5 miles (8km) south of the main CARE site, during a light snowfall on Saturday, January 21. The SVI is set up about two feet off the ground and the snowflakes are falling from top to bottom through the frame. They can be seen here in different three-dimensional orientations at 5x magnification. Credit: NASA/Larry Bliven Needles in a Stack of Snowflakes

Snowflakes come in a wide variety of shapes and sizes. Individual flakes can be long thin needles, hollow columns, or flat plates with millions of different patterns. Their fluffy shapes and sheer variety are what make measuring snow rates tricky.

"Raindrops are going to pretty much fall straight down as fairly dense liquid particles. Snowflakes wobble; they're blown by the wind. They're going to have all these different characteristics as to how they fall. And that makes a difference in what the satellite sees," says Skofronick-Jackson.

The variety of snowflake shapes also complicate estimates of how much water snow holds. A "wet" snow of fluffy flakes has more water per unit volume than "dry" snow. On the ground, the same physical volume of those types of snow contain very different amounts of water, and this water, called snowmelt, is what ultimately ends up in reservoirs, rivers and other sources of freshwater.

The GPM satellite will measure global precipitation, be it heavy tropical rain, moderate rain, light rain or snow. GPM’s radar instrument, built by mission partner, the Japanese Aerospace Exploration Agency, provides essential measurements of the size of the flakes and how much water they hold. The radar works by actively sending out microwaves on two different frequencies. When the microwave pulses encounter a raindrop or snowflake, it reflects part of both pulses back to the radar's sensors. By timing the interval between when the pulse was sent and then received the radar knows how far away the particles are in the cloud.

Add up all the particles and you get a full picture of all the rain and snow in one weather event. "It's like a CAT-scan," says Skofronick-Jackson. "You can actually see layer by layer what's in the cloud."

The atmosphere does not lend itself to easy understanding. Temperature, humidity and winds change with altitude, creating many layers of air with different properties. The topography of land surfaces and oceans affect global weather patterns. Those conditions then combine to create both short-term weather and long-term climate. Part of resolving that picture at high latitudes is to understand snow's dynamics inside clouds.

"We know most clouds don’t have just one classic snowflake shape, but what we don't know is what are the mixtures of snowflake types," says Skofronick-Jackson.

By combining the broader radiometer measurements that distinguish liquid from ice and tell how much water the clouds hold with the vertical details provided by the radar, the GPM science team may be able to see what mixture of particles are falling to the ground, or if a snowflake makes it all the way to the ground at all.

Finding that line is one of the goals of the cold-season experiment.

How Many Ways Can You Measure a Snowflake?

The GPM GCPEx field mission is currently underway just north of Toronto, Canada in Egbert, Ontario. Located near Lake Huron, the region is prone to both lake effect snow squalls and widespread snowstorms. NASA is working with Environment Canada to measure snow as many ways as possible to match snow on the ground with snow in the clouds and with simulated satellite passes measured from aircraft flying overhead.

Instruments on the ground at the Center for Atmospheric Research Experiments measure the quantity of snow, how fast it falls and how much water it holds. Radar and radiometers on the ground also get an up-close look at the snow as it falls from clouds to the surface. Meanwhile, two research planes, the University of North Dakota's Citation and the Canadian National Research Council Convair 580, fly though the clouds measuring snowflake sizes and water content, temperature and cloud water. "They'll do spirals so you can see all the way from the top of the cloud to the bottom of the cloud," says Skofronick-Jackson.

The datasets will complement current measurements made by radiometers on Earth-observing satellites Aqua and Soumi NPP and the Cloud Profiling Radar on CloudSat.

"What we can do with all these measurements is learn these relationships between what the radar and the radiometer sees, what's in the cloud, and what's falling out," says Skofronick-Jackson.

The GCPEx campaign, running from January 17 through February 29, is on its way to filling in that picture.