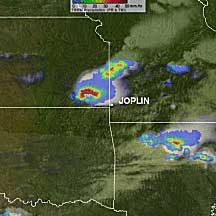 NASA's TRMM satellite passed over the supercell of thunderstorms before it raked over Joplin, Missouri on May 22, 2011. TRMM captured this image (the first image of the animated GIF below) of the cell's rainfall at 20:42 UTC (3:42 p.m. CDT local time). The yellow and green areas indicate moderate rainfall between .78 to 1.57 inches per hour. Red areas are considered heavy rainfall at almost 2 inches per hour. Credit: NASA/SSAI, Hal Pierce On Sunday May 22, 2011, the Tropical Rainfall Measuring Mission (TRMM) satellite captured an image of the rainfall rate in the supercell thunderstorm that generated the deadly twister that struck Joplin, Missouri.

TRMM is a satellite that is managed by both NASA and the Japanese Space Agency, and monitors rainfall rates in the tropics. It's often used for hurricane research, but also calculates rain rates in other weather systems. On May 22 at 2042 UTC (3:42 p.m. CDT), about two hours before the deadly tornado touched down in Joplin, Missouri, TRMM captured rainfall rates in a supercell thunderstorm that was approaching Joplin from the west. A supercell, also known as a rotating thunderstorm, is a thunderstorm with a deep, continuously-rotating updraft.

"This supercell contained a deadly tornado as it moved into southwestern Missouri a few hours later and hit Joplin, Missouri," said Hal Pierce, meteorologist on NASA's TRMM team who created images using TRMM rainfall imagery. TRMM's Microwave Imager (TMI) and Precipitation Radar (PR) were used to create images that showed an analysis of rainfall in the vicinity of the storm. TRMM data revealed a large area of heavy rainfall, where rainfall rates were more than 2 inches (50 millimeters) per hour.

Two hours after the TRMM satellite captured that heavy rainfall, the tornado touched down in Joplin with winds up to 198 miles per hour, according to the National Weather Service. As of May 24, 117 people were reported killed, making the twister the most deadly in the U.S. in over 60 years.

This animation blends a visible image of the supercell's clouds as seen from the GOES-13 satellite with a rainfall analysis from the TRMM satellite to show where the heaviest rainfall (red) was occurring. Credit: NASA/SSAI, Hal Pierce

Southwestern Missouri can't get a break from the severe weather as the recovery efforts continue today, May 24. The National Weather Service (NWS) in southwestern Missouri noted that "Multiple rounds of thunderstorms are expected over the region from this evening through at least Wednesday morning."