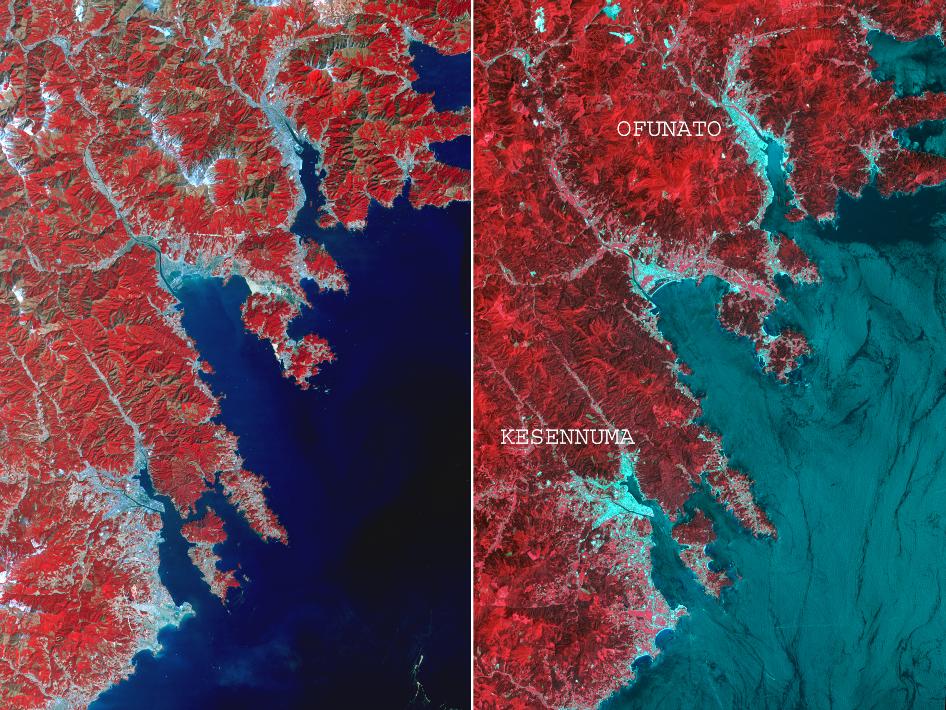 On March 14, 2011, the Advanced Spaceborne Thermal Emission and Reflection Radiometer (ASTER) instrument on NASA's Terra spacecraft captured an image of the northeastern Japan coastal cities of Ofunato and Kesennuma, about 90 kilometers (55 miles) northeast of Sendai. This region was significantly affected by the tsunami that followed the March 11, 2011, magnitude 9.0 earthquake centered offshore about 130 kilometers (80 miles) east of Sendai.

This before-and-after image pair reveals changes to the landscape that are likely due to the effects of the tsunami. The new image is on the left. The image on the right was acquired in August 2008. Areas covered by vegetation are shown in red, while cities and unvegetated areas are shown in shades of blue-gray.

When compared closely, vegetation is no longer present in many coastal areas in the new image, particularly around Kesennuma, a city of about 73,000. The population of Ofunato is about 42,000. These changes are most likely due to the effects of the tsunami.

With its 14 spectral bands from the visible to the thermal infrared wavelength region and its high spatial resolution of 15 to 90 meters (about 50 to 300 feet), ASTER images Earth to map and monitor the changing surface of our planet. ASTER is one of five Earth-observing instruments launched Dec. 18, 1999, on Terra. The instrument was built by Japan's Ministry of Economy, Trade and Industry. A joint U.S./Japan science team is responsible for validation and calibration of the instrument and data products.