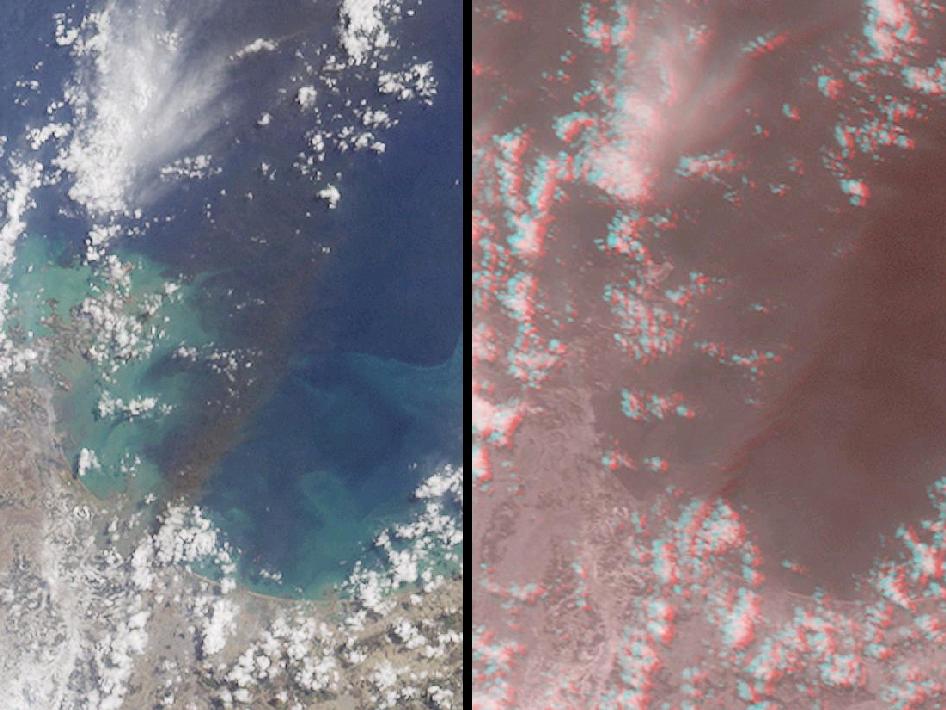 In the aftermath of the massive earthquake that struck northeastern Japan at 2:46 p.m. local time on March 11, 2011, and its subsequent tsunami, several oil refineries and industrial complexes caught fire, including facilities in the Port of Sendai and a petrochemical facility in Shiogama, where a large explosion has been reported. This pair of images, acquired on March 12, 2011 by the Multi-angle Imaging SpectroRadiometer (MISR) instrument aboard NASA's Terra spacecraft, shows a large smoke plume that appears to be associated either with the Shiogama incident or the Sendai port fires. The presence of clouds makes it difficult to pinpoint the exact origin. The data were obtained at a local time of about 10:30 a.m.

The images are oriented with north at the left and east at the top, and cover an area measuring 85 kilometers by 115 kilometers (53 miles by 71 miles). The left-hand view is a natural-color image from MISR's nadir (vertical viewing) camera. The large brown smoke plume extends about 85 kilometers (53 miles) southeast from the coastline. To confirm that the brown plume is an airborne feature, the right-hand image is a stereoscopic "anaglyph" created from data in MISR's red spectral band, and generated by displaying the 46-degree backward view in red and 60-degree backward view in cyan. The separation between the red and cyan images is known as stereo parallax, and is related to the height of the observed features above the surface. Viewing the anaglyph with red-cyan glasses (red filter over the left eye) gives a perception of height. No separation is visible for the coastline, which is at sea level, but the clouds and plume are distinctly elevated. The height of the plume is estimated to be about 2 kilometers (1.2 miles), at a similar altitude as the nearby clouds.