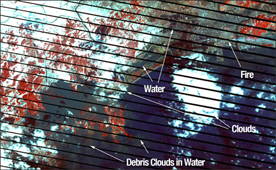 This false color image of Sendai, Japan was captured by the Landsat 7 ETM+ bands 4,3, and 2 on March 12, 2011 and shows inland areas inundated by water from the tsunami, smoke from fires burning, and clouds of debris in the water. Credit: USGS/NASA, Mike Taylor
› Larger image 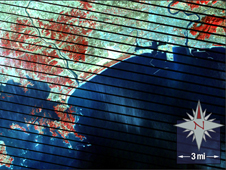 This false color image of Sendai, Japan was captured by the Landsat 7 ETM+ bands 4,3, and 2 on February 24, 2011. Credit: USGS/NASA, Mike Taylor
› Larger image Before and after images from the Landsat 7 satellite show the after effects of the tsunami that followed the 9.0 earthquake off of Japan's east coast last weekend. A side-by-side comparison reveals inland areas inundated by water from the tsunami, smoke from burning fires and clouds of debris in the water.

In the images from March 12, you can see water on land especially to the north of Sendai. You can also see water rise and/or inundation on the island in front of the Sendai coast. The clouds are prominent in the imagery but the inland water, debris in the ocean and smoke from the fires are still visible in the March 12 image. The black lines in the image are data band gaps.

Landsat satellites have taken specialized digital photographs of Earth’s continents and surrounding coastal regions for over three decades, enabling people to study many aspects of our planet and to evaluate the dynamic changes caused by both natural processes and human practices. For more information about Landsat, visit: http://landsat.gsfc.nasa.gov/.