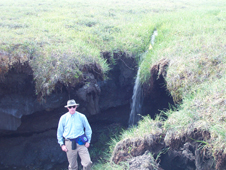 Larry Hinzman (standing in foreground) documented observations of this thermokarst – likely a sign of permafrost beneath the surface – in 2004 on the tundra of the North Slope of Alaska in the Kuparuk River watershed in the foothills of the Brooks Range. Credit: University of Alaska/Larry Hinzman
› View larger image

Who is Dr. Larry Hinzman?

Affiliation: Director of the International Arctic Research Center at the University of Alaska in Fairbanks, and a leading expert on permafrost.

Expertise: Why and where permafrost is thawing, and how best to measure its changes (Hinzman is working on a NASA-funded project in Russia). Hydrological field research and modeling surface and subsurface flow; Arctic and sub-Arctic meteorological processes; soil physics and chemistry.

More info and publications www.iarc.uaf.edu/people/indiv/iarc_all_staff.php?photo=lhinzman Permafrost is not your garden-variety soil. Beneath the frozen depths of the Arctic, the icy soil stores an estimated 1.5 trillion tons of carbon – including methane and other hydrocarbons -- twice as much as is found in the atmosphere. These greenhouse gases are locked up in frozen ground that covers 24 percent of the exposed land in the high latitudes of the Northern Hemisphere, as well as Antarctica and the Patagonia region of Argentina and Chile.

Greenhouse gases are now escaping the permafrost and entering the atmosphere at an increasing rate -- up to 50 billion tons of methane per year – due to a global thawing trend. This is particularly troublesome because methane heats the atmosphere with 25 times the efficiency of carbon dioxide. The release of this stored carbon could change climate in the Arctic in ways researchers have yet to fully understand. Researchers, such as Larry Hinzman of the University of Alaska, Fairbanks, are digging deeper to find out more. Hinzman is the director of the International Arctic Research Center at the University, and a leading expert on permafrost.

Permafrost is soil, rock, or peat that has been frozen below zero degrees Celsius (32 degrees Fahrenheit) continuously for two or more years. This means it's not defined by geology or region. It can exist in high mountain areas such as the Rocky Mountains and Africa's Mt. Kilimanjaro; in peak elevations, such as in North and South Dakota; and even in rare spots on the Hawaiian Islands. Permafrost is like frozen chicken in that it thaws but it does not melt (in contrast to ice which melts).

How did you find yourself studying frozen soil?

Following a childhood in rural South Dakota, I pursued a degree in agronomy. Agronomy explores the impact of agriculture on the environment and melds the biology, chemistry, and earth science associated with soil with meteorology and plant growth. After completing that master's degree, I came to Alaska on a vacation. I loved it so much up here that I got a job working for a gold prospector, but nearly starved that winter without finding much gold. A friend recommended a job at the university in Fairbanks as an agricultural field technician, which was more aligned with my education.

Despite fighting off attacks to our experiments from buffalo and sandhill cranes, I enjoyed the work and decided to pursue a doctorate in soil physics.

I leapt from agronomy to hydrology, but the two are linked. So much of the study of water in agriculture involves understanding how permafrost controls moisture in Alaskan soils, and therefore whether some crops grow and others don't when permafrost is present.

How does thawing permafrost affect life in Alaska and elsewhere in the Arctic?

In Alaska, we're living right on the knife's edge between frozen and thawed landscape. That's a huge difference between the lower 48 states and us. Temperature changes here affect the structural stability of entire ecosystems much more than in a more temperate state such as Arkansas.

If permafrost changes -- if it degrades even a foot -- it will act like a big domino that knocks everything else over. When the sun's rays hit frozen soil, the soil moisture evaporates, making the surface cooler. Without permafrost, drier soil causes surface warming, and this changes the local climate. Thawing permafrost also releases methane into the atmosphere in amounts potentially far greater than human emissions.

Permafrost below the Arctic Ocean has trapped huge quantities of methane (called gas hydrates), and as the permafrost degrades, the amount of escaping methane increases, with implications for climate change.

What tools do you use to detect and measure permafrost?

Permafrost is very hard to see. But we can trace changes in surface conditions that sometimes occur when permafrost thaws with a technique called interferometry, which uses electromagnetic waves to point us to places where surface subsidence has occurred. Interferometry allows us to detect massive surface disturbances called “thermokarsts,” which are produced as permafrost thaws and ice wedges contained in it melt.

We also use NASA’s gravity-detecting GRACE satellites, which help us trace changes in groundwater reservoirs that may indicate thawing permafrost.

How are NASA and the University of Alaska involved in the study of permafrost?

We have an ongoing satellite project with NASA to look at Russian permafrost. Russia is experiencing rapid degradation of permafrost, and we want to learn more about how that thawing is affecting the levels of lakes and rivers and the amount of melt water – released from melted snow or ice – pouring into the ocean.

The Russians have been collecting runoff data for a century. Those data are telling us that runoff is increasing in the winter, but we're trying to figure out why. We believe that thawing permafrost plays a role in controlling infiltration of rain and snowmelt, which affects the timing of eventual runoff into rivers and to the ocean. We know for sure that the increased runoff is contributing to a freshening of the waters of the Arctic Ocean; lower-density freshwater tends to float on the saltier ocean water. Increases in fresh water near the Earth’s poles could affect the circulation in the oceans, which influences everything from atmospheric temperatures to storm intensity.

The Hyperion sensor aboard NASA’s EO-1 satellite captured thermokarst lakes along the tundra around Barrow, Alaska in July 2009. The lakes form when melt water ponds up in summertime atop permafrost and indicate areas where greenhouse gases like methane are escaping the frozen soil as it thaws. Credit: NASA's Earth Observatory/Robert Simmon
› View larger image