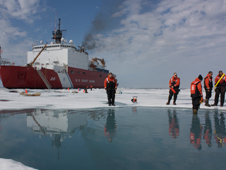 › View larger
During the ICESCAPE mission's first field campaign in summer 2010, scientists collected optical and chemical data during a stop amid sea ice in the Chukchi Sea. Researchers return in 2011 for another look at how climate change is impacting Arctic ecosystems. Credit: NASA/Kathryn Hansen Scientists embark this week from Alaska on the second and final campaign of a NASA field campaign to study how changing conditions in the Arctic affect the ocean's chemistry and ecosystems.

On June 25, the ICESCAPE mission, or "Impacts of Climate on Ecosystems and Chemistry of the Arctic Pacific Environment," resumes its shipborne investigation of the impacts of climate change in the Chukchi and Beaufort seas along Alaska's western and northern coasts. Research teams depart from Dutch Harbor, Alaska, aboard the U.S. Coast Guard Cutter Healy.

The field campaign takes 47 scientists for five weeks to the Arctic Ocean, where a variety of instruments will be used onboard the Healy and deployed into the ocean and on the sea ice. Following the mission's first campaign in summer 2010, the second year of sampling seeks to find year-to-year differences and provide data for new lines of investigation.

Combined observations from the field and from NASA satellites are critical to understanding the Arctic, where the signals of climate change are amplified. The accelerated decline of Arctic sea ice extent and thickness exemplifies this trend, and scientists want to know how this change affects other ocean processes and marine life.

"Multidisciplinary field campaigns like ICESCAPE take advantage of simultaneous satellite and field measurements," said Carlos Del Castillo, acting program manager of the Ocean Biology and Biogeochemistry Program at NASA Headquarters in Washington. "The advantage of satellites is that we can routinely collect observations of the whole planet. That data combined with field work and computer modeling gives us a better understanding of how the Earth system works."

Phytoplankton, microscopic organisms that live in watery environments, are a key focus of the campaign. They form the base of the aquatic food web, participate in cycling Earth's carbon between the atmosphere and the ocean and are susceptible to climate change. NASA has monitored changes in phytoplankton from space worldwide with the Moderate Resolution Imaging Spectroradiometer instrument on the Aqua satellite and the Sea-viewing Wide Field-of-view Sensor, which ended observations in 2010. 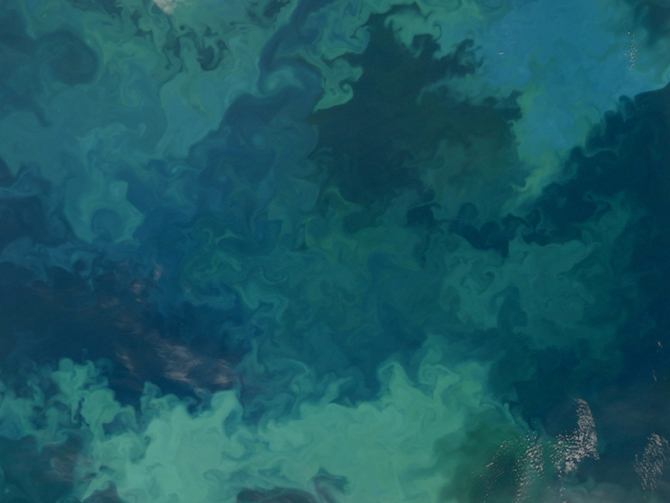 "Last year, ICESCAPE nailed down quite a few things in terms of the phytoplankton work," said Kevin Arrigo of Stanford University in Palo Alto, Calif., the mission's chief scientist. "We know pretty well now how fast they are growing and what they are responding to. The repeat measurements from this voyage will help us confirm what's going on."

The 2010 campaign gave researchers a glimpse of what might be happening in Barrow Canyon, one of most productive areas for phytoplankton growth in the Beaufort-Chukchi region. While many blooms last just a few weeks before consuming all of the local nutrients and declining, the bloom in Barrow Canyon gets its start in spring and carries on through summer.

Scientists think the extended bloom can be explained by unique patterns in the path and timing of ocean currents. In spring, a stream of water carries nutrients from the Pacific Ocean up through the Bering Strait and delivers them to Barrow Canyon. The water hugs the coast and arrives quickly, providing the nutrients for the bloom to get its start. Two other streams take a more circuitous route and arrive later, sustaining the bloom through summer.

"With this year's voyage, we hope to acquire more details about the physical processes pulling nutrients from deep water to the surface," Arrigo said.

New to ICESCAPE in 2011, the ship will forge north through the Beaufort Sea to explore the relationship between shallow water on the continental shelf and deep water in the Canada Basin. Phytoplankton on the shallow shelves tend to flourish when the ice retreats and scientists want to find out what feeds the bloom.

Last year, researchers saw some indication that nutrients were moving between deep and shallow water. Wind unexpectedly blew thick, multiyear sea ice south to the edge of the shelf, at some places up to 20 feet thick. The ice proved too thick for the icebreaker to penetrate. The Healy, the newest and most technologically advanced U.S. polar icebreaker, is designed to break four-and-a-half feet of ice continuously at three knots.

This year, the field campaign begins two weeks later, which means the Healy is expected to encounter thinner, summer ice and thus have a better chance of exploring the ecosystems in water that spends most of the year under a blanket of ice.