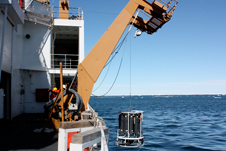 A crane lowers instruments over the side of the Healy into the Chukchi Sea on June 28 to collect water samples and take readings at different depths.
Credit: NASA/Kathryn Hansen 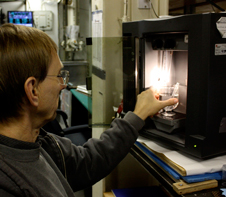 Onboard the Healy, Dariusz Stramski puts a water sample into the Coulter counter instrument to count the phytoplankton.
Credit: NASA/Kathryn Hansen 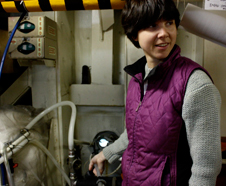 Emily Peacock of Woods Hole Oceanographic Institution removes the hose that pulls water from the Chukchi Sea. The water flows into an instrument that photographs and categorizes phytoplankton.
Credit: NASA/Kathryn Hansen 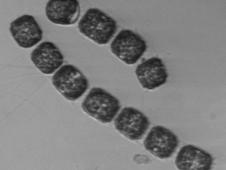 A large phytoplankton specimen photographed by the Imaging Flow Cytobot instrument.
Credit: Sam Laney, Woods Hole Oceanographic Institution Onboard the U.S. Coast Guard Healy, June 29 -- "I think there are quite a lot of particles in the water today."

That's the analysis from Dariusz Stramski, a scientist onboard the U.S. Coast Guard Cutter Healy for NASA's ICESCAPE mission in the Arctic's Chukchi Sea. The five-week mission, NASA's first oceanographic field campaign, is studying the physics, chemistry and biology of the ocean and ice within a changing Arctic.

Stramski, from the Scripps Institution of Oceanography, stirred a flask holding a fresh sample of water pulled from the Chukchi Sea not an hour earlier. He returned the flask to the Coulter counter, a boxy instrument that sucks the water through a thin tube, counting everything passing through with a diameter between 0.7 to 100 microns. Thin human hair has a diameter of about 40 microns.

That range of diameters seen by the Coulter counter encompasses single-celled plants (phytoplankton) small and large, along with nonliving particles and small marine animals called zooplankton.

Particles of different sizes vary in how they scatter light. And depending on their pigment, they also impact the color of the ocean. Both are factors that influence the interpretation of NASA satellite data used for observing ocean "color" and thus phytoplankton ecology. Phytoplankton take up carbon dioxide, produce oxygen, and can make the ocean a sink for carbon. Toward improving the big picture from space, scientists need to know what's happening on the small scale.

Stramski watched for data to appear on his computer, charting the number of particles of various sizes. Today the Coulter counts more than 120,000 particles larger than 0.7 microns in just 1 milliliter of water. Typically it's a smooth curve, with a high abundance of small particles and fewer large particles. But often times in these Arctic waters there's a distinct bump or maximum in the graph, indicating a phytoplankton population of a specific size is thriving.

Why here and why now? The biology is only part of the question. ICESCAPE has brought together a team of ice and ocean experts in the fields of biology, chemistry, and physics to collect data at frequent stops across the sea in an effort to begin to piece together the plankton picture.

"Today, the typically smooth curve was violated with a bump at about 10 microns, meaning a species of that size is very happy here," Stramski said. "Next we need to talk to a biologist who can identify the cells and tell us what they are."

That's where Sam Laney and colleagues from Woods Hole Oceanographic Institution come in. Laney's Imaging Flow Cytobot, at the stern of the ship, continuously pulls in ocean water from a hose and then photographs and categorizes everything containing chlorophyll -- mostly phytoplankton -- that passes through.

"It's essentially an automated microscope," Laney said. "With this instrument we can tell who is there and how much is there."

The pictures show clear outlines of an otherwise unseen world. Some are long chains of diatoms, that can’t move on their own, while others are tiny self-propelled flagellates -- the unlucky ones being eaten by predators or dying, evident by their empty cells. Still many others thrive.

In the open ocean Laney and colleagues find about 400 plankton in a 5-milliliter sample of water. Amid a bloom, however, they find up to 4,000 cells.

Early in the ICESCAPE cruise, the Healy passed through the "Chukchi hotspot." Looking at images from NASA's Aqua satellite, researchers expected the bloom. Still, they found among the highest concentration ever seen, which was "a big surprise," said Kevin Arrigo of Stanford University, chief scientist of the mission.

Remote sensing in the Arctic can be tricky, however, as pigments from dissolved organic matter and the output from rivers can complicate the picture. "Telling the difference is one of the reasons we're doing ICESCAPE," Arrigo said.

From the Healy, the scientists can identify locations of the nutrients that drive plankton growth, and they find that they are turning up in unexpected places and at unanticipated times as the region undergoes change.

But nutrients are only part of the picture. "We can do a transect and in an hour that can tell us the flow field, salinity, and current speeds. Then we map those data with nutrient fields to get a real-time picture," Arrigo said.