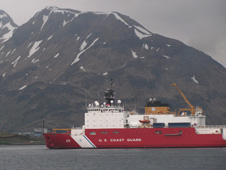 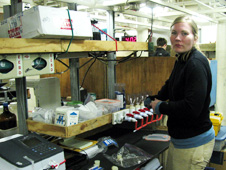 Karen Frey of Clark University, Worcester, Mass., sets up her team's sampling station onboard the icebreaker Healy the day before it left Dutch Harbor.
Credit: NASA Dutch Harbor, Alaska -- NASA’s first oceanographic research expedition got underway this morning as the U.S. Coast Guard icebreaker Healy steamed out of this island fishing port in the North Pacific. The five-week ICESCAPE mission, which stands for "Impacts of Climate on Ecosystems and Chemistry of the Arctic Pacific Environment," is now heading for the Bering Strait on its way north into the Chukchi and Beaufort seas.

The science teams on the mission spent a full day on Monday loading scientific gear and supplies onto the Healy, unpacking equipment, and setting up laboratory space. "It's been kind of a crazy day," said ICESCAPE chief scientist Kevin Arrigo of Stanford University. "There are a lot of people – nearly 50 scientists -- and a lot to set up. Doing all that in one day is not a lot of time. But the Healy crew has been great in helping us get everything set up."

NASA is sponsoring the research expedition to explore how changes in the Arctic sea ice cover are altering the ocean ecology in the region. The scientists onboard will take a detailed look at how changing conditions in the Arctic are affecting the ocean’s chemistry and biology that play a critical role in global climate change.

"This is a really exciting cruise for me," said ICESCAPE co-chief scientist Don Perovich of the U.S. Army's Cold Regions Research and Engineering Laboratory, Hanover, N.H. "I've been on a lot of cruises to polar regions. I've probably spent a year and a half of my life on icebreaker cruises. But this is the first time I've been out with a large group of biologists and biogeochemists, and that's really exciting."

ICESCAPE is sponsored by the Earth Science Division’s Cryospheric Sciences and Ocean Biology and Biogeochemistry programs in NASA’s Science Mission Directorate. A second ICESCAPE voyage is planned for 2011.