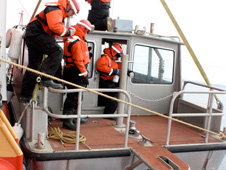 The Arctic survey boat is lowered by crane for science excursions away from the main ship, which can mix water and cast a shadow. On July 2, NASA's Stan Hooker and Joaquin Chaves board the boat with Coast Guard crew to make first-of-a-kind measurements near the edge of Arctic sea ice.
Credit: NASA/Kathryn Hansen 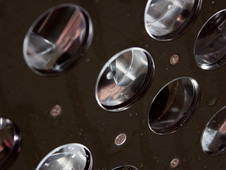 Sensors on the Hydroscat 6 instrument measured optical properties of the Chukchi Sea at various depths. Some sensors emit light and measure how much is scattered back, while others measure the abundance of chlorophyll and dissolved organic matter.
Credit: NASA/Kathryn Hansen 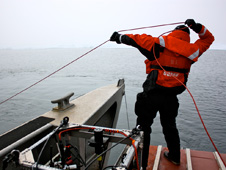 Crew from the Healy worked on the Arctic survey boat on July 2 reeling in an instrument from the Chukchi Sea that measures sunlight and how it interacts with the water. The measurements are similar to those made by ocean-observing satellites.
Credit: NASA/Kathryn Hansen 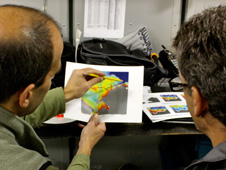 Chief scientist Kevin Arrigo (right) and physical oceanographer Bob Pickart analyze a map of the Chukchi and Beaufort seas on July 2, planning a route for the science mission. Pickart points to Barrow Canyon, the site of an ecological hotspot.
Credit: NASA/Kathryn Hansen
During NASA's ICESCAPE voyage to the Arctic, scientists have been looking at the phytoplankton in the Arctic's Chukchi Sea -- how many, how big and at what depths they are found. But there are other ways of looking at these small life forms.

"We measure phytoplankton in terms of their pigments and light absorption properties," said Stan Hooker of NASA's Ocean Biology and Biogeochemistry Calibration and Validation Office at Goddard Space Flight Center, Greenbelt, Md. Hooker, Joaquin Chaves and Aimee Neeley, also of NASA, measure the color of the water. Anything in the water, plankton or not, can influence that color.

On July 2, a crane maneuvered a small boat halfway down the side of the U.S. Coast Guard Cutter Healy – the platform for the five-week ICESCAPE mission, NASA's first dedicated oceanographic field campaign, which is studying the physics, chemistry and biology of the ocean and sea ice within a changing Arctic.

Hooker, Chaves and Coast Guard crew boarded the small boat and readied for an expedition away from the stirred water and shadow of the 420-foot Healy. Lowered to the ocean surface, Hooker's team powered away, entering uncharted waters.

Maneuvering over smooth water and around chunks of sea ice, the small boat slowed to a stop near the edge of an ice floe.

"This is new for us because we usually haven't been able to work this close to the ice before," Hooker said. "Satellites can't measure near the ice, so we do this to help specify the next generation of equipment, and to contribute to the science objectives."

First over the side was a small red instrument that the crew dropped on a line into the ocean and then reeled by hand, as if wrangling a fish. Sensors on the instrument measured the wavelengths of sunlight at different depths - both what's coming into the ocean and what's reflected back out which is similar to what is "seen" by satellites.

Next the crew lowered a second, larger package of instruments into the depths of the ocean. One pair of sensors emits light and measures how much is scattered back. Another pair measures the fluorescence of chlorophyll and colored dissolved organic matter, an important distinction as both appear green to satellites.

Last, the crew collected water samples to be returned to the Healy for analysis in the lab.

"We can measure the changes in the color to find out what's happening with the ecology," said Greg Mitchell, a research biologist at Scripps Institution of Oceanography in San Diego, who analyzes the water samples. "We can relate color back to how much chlorophyll is in the ocean, how much algae biomass there is, and processes such as the rate of photosynthesis."

Similar, more frequent measurements are made from the Healy, which marked its one-hundredth ocean station of the mission on July 8. The small boat deploys less often -- almost daily -- but reaches more targeted regions.

"We do the measurements at sea in order to relate what's going on in the ocean with the optics," Mitchell said. "Then we apply those relationships to the optical data from the ocean color satellites and we can make estimates of processes and distributions globally."

Onboard the Healy to help scientists figure out where to sample is Bob Pickart, a physical oceanographer from Woods Hole Oceanographic Institution. Pickart can decipher water type and circulation to guide where to make measurements.

A great unknown, for example, is a picture of what's feeding the evolution of a "hotspot" in Barrow Canyon. Right now, winter water -- rich with nutrients -- has been carried across the shallow shelf where the Healy is surveying.

"This is a really interesting, important time of year," Pickart said. "As the ice recedes, productivity is starting and things are getting cranked up."

But for how long will these hotspots thrive? While this is dictated by light and nutrients, the circulation near Barrow and Herald canyons -- two fissures that channel water off the shelf -- plays a vitally important role as well.

On July 12, after a night of cutting through sea ice, ICESCAPE scientists caught a glimpse of the hotspot. As an instrument lowered from the Healy descended through the water, real-time fluorescence information showed low levels of chlorophyll.

Scientists on the Healy will analyze the hotspot data and water samples, but whether a plankton bloom has come and gone, the region remains a hotspot for ground-dwelling communities, according to Karen Frey of Clark University. Feeding off plankton that sink to the seafloor, species here are diverse and large. A single sample retrieved from the ocean floor turned up a large crab, sponges and a sea star.

Meanwhile, samples returned from the near-ice survey July 2 on the small boat are turning up mixed results – sometimes indicating the presence of phytoplankton communities and sometimes not, according to Atsushi Matsuoka, of Laboratoire d'Oceanographie de Villefranche. To find out why, his group will look at trends after returning home from ICESCAPE.