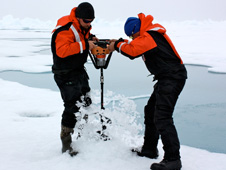 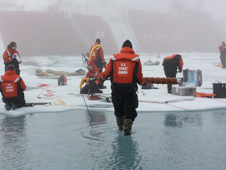 Teams of scientists set up equipment on sea ice near the U.S. Coast Guard icebreaker Healy in the Chukchi Sea on July 4.
Credit: NASA/Kathryn Hansen 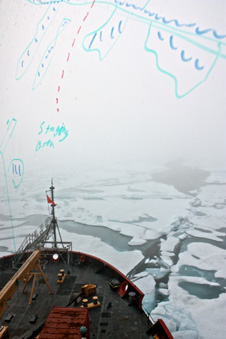 ICESCAPE scientists draw on the ship's bridge windows on July 9 as they plan a day of work on sea ice in the Arctic's Chukchi Sea.
Credit: NASA/Kathryn Hansen
"Over by the fish, below the soccer field," said ice scientist Bonnie Light, pointing at the Arctic sea ice from the bridge of the U.S. Coast Guard Cutter Healy earlier this month during NASA's ICESCAPE oceanographic mission.

Light, of University of Washington, and other ice scientists crowd around the windows on the bridge of the Healy describing shapes created by the melt ponds on the surface of the Arctic sea ice. They point out everything from unicorns to Volkswagons. But the imaginative morning ritual is serious business; the ice teams are discussing where on the ice to work and planning the logistics of the day’s field work.

Since 1979, satellites have tracked changes to Arctic sea ice extent, showing dramatic declines. On average the ice is losing about 13 percent of its summer coverage each decade and the record low was set in 2007. The decline raises two key questions: Why are these changes happening and what do they mean for Arctic ecosystems, particularly the ocean-dwelling plants -- phytoplankton -- that play an integral role in Earth's carbon cycle?

Exploring those questions since last month is the ICESCAPE mission onboard the Healy, which is studying the physics, chemistry and biology of the ocean and sea ice within a changing Arctic. On 12 days scattered throughout the five-week mission, the Healy "parked" amid an ice floe and teams of ice scientists stepped foot on the floating ice for a close up look.

After agreeing on a plan from the bridge, ice scientists on July 9, 2010, readied for work at ice station 10 in the Chukchi Sea. The ship's crane lowered sleds of scientific equipment over the side of the ship and then scientists descended down a steep ramp to the ice where they dispersed and set up equipment.

Coast Guard crew and scientists checked the ice for safety, and then guided a deafening drill through the ice and into the ocean. Researchers deployed instruments above, through and below the drill holes -- scattered strategically across the study site -- to characterize how much light is reflected, absorbed and transmitted by the ice.

The ICESCAPE mission is looking at how Arctic ecology is changing with the changes in ice cover. The Earth is undergoing a grand experiment and scientists want to understand those changes because some of those changes may affect our future.

Surprisingly, polar oceans are rich with life and play a major role in drawing down carbon from the atmosphere. But how will that capability change in an ice-free Arctic? How will the creatures in the sea themselves change? Understanding the connections between the ice and the phytoplankton -- the lower rungs on the food chain -- are key to understanding these changes.

"From a couple of optical measurements, a lot of thickness measurements, and some melt pond measurements, we can do some calculations and get a 2D map of how much light gets through at different wavelengths, and how much of that light is what's called 'photosynthetically available radiation,' which is the stuff the little algae really like," said Don Perovich of the Cold Regions Research and Engineering Laboratory.

To characterize the ice and its optical properties, researchers begin work on top of the ice. Here, pools of water, or "melt ponds," litter the surface, absorbing more sunlight -- both accelerating melt and passing more of that light along to the ocean below.

Chris Polashenski of Dartmouth College waded onto thin ice supporting a pond, drilled a hole, and measured the ice thickness. Just 30 centimeters of ice separated Polashenski from 150 feet of ocean. In contrast, surrounding ice measured in at an average thickness of 80 centimeters.

"The thickness distribution is one of the key parameters of sea ice," Perovich said. "In particular for this experiment it strongly governs how much light gets through into the ocean."

So how much light makes it through these ice thicknesses? To find out, Light worked with her team to collect optical measurements tracking the transmission of light above, inside, and just below the ice at the borehole sites.

Still other groups looked deeper, at both the life forms in the water column below the ice and the light that is sustains them. To gather these snapshots, Karen Frey of Clark University and colleagues dropped an optical sensor down 30 meters, while simultaneously collecting samples of water with Chief Scientist Kevin Arrigo’s group from Stanford University.

Back in the ship's onboard lab, Frey and Arrigo's groups looked at the life contained in the samples, while Sam Laney of Woods Hole Oceanographic Institution fed them under an microscope that automatically collects images of the tiny life forms.

Researchers are finding strong connections between the properties of the ice and the communities of microbes beneath them. For example, ponds were found to transmit between three and 10 times more light than bare ice.

"Algae are affected by what's above them," said Laney, who noted that algae communities photographed under melt pond ice were different compared to those that turned up under white ice.