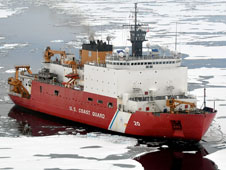 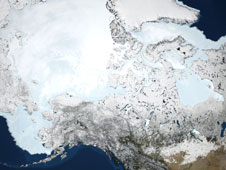 Declining Arctic sea ice is one factor affecting the region's changing ocean ecosystem. This image based on data from NASA's Aqua satellite shows the extent of sea ice in March 2008.
Credit: NASA 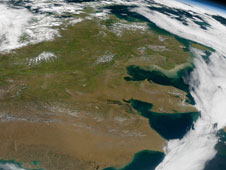 Looking southward from high over the Arctic Ocean, NASA's Aqua satellite reveals coastal phytoplankton blooms in the Chukchi Sea along northern Alaska (foreground) stretching into the Bering Strait in September 2006.
Credit: NASA NASA’s first dedicated oceanographic field campaign goes to sea next week to take an up-close look at how changing conditions in the Arctic are affecting the ocean’s chemistry and ecosystems that play a critical role in global climate change.

The ICESCAPE mission, which stands for "Impacts of Climate on Ecosystems and Chemistry of the Arctic Pacific Environment," will investigate the impacts of climate change on the ecology and biogeochemistry of the Chukchi and Beaufort seas along Alaska's northern coast. ICESCAPE takes to sea onboard the U.S. Coast Guard Cutter Healy, the United States’ newest and most technologically advanced polar icebreaker. The Healy conducts a wide range of research activities and is designed to break four-and-a-half feet of ice continuously at three knots.

A key focus of the mission is how changes in the Arctic may be altering the ocean’s ability to absorb carbon from the atmosphere. The greenhouse gas carbon dioxide is a leading cause of global warming.

Predictions of future climate change depend on knowing the details of how this carbon cycle works in different parts of the world. NASA’s Earth science program conducts research into the global Earth system using satellite observations. Identifying how Earth's ecology and chemistry are influenced by natural processes and by humans is a key part of this research.

The Arctic Ocean, unlike other oceans, is almost completely landlocked, making it an ideal location to study ongoing climate changes in a marine ecosystem already heavily impacted by declining sea ice cover, ocean acidification, and an increase in incoming solar radiation. These changes are likely to modify the physics, biogeochemistry, and ecology of this environment in ways that are not well understood. Satellite remote sensing has provided some insight into these changes which ICESCAPE is designed to advance.

"The ocean ecosystem in the Arctic has changed dramatically in recent years, and it’s changing much faster and much more than any other ocean in the world," said ICESCAPE chief scientist Kevin Arrigo of Stanford University. "Declining sea ice in the Arctic is certainly one reason for the change, but that’s not the whole story. We need to find out, for example, where the nutrients are coming from that feed this growth if we are going to be able to predict what the future holds for this region."

The Healy leaves Dutch Harbor in Alaska's Aleutian Islands on June 15 and heads to the Bering Strait where it begins ocean sampling. The voyage continues across the southern Chukchi Sea and into the Beaufort Sea along northern Alaska’s ocean shelf. In early July the Healy will head north into deeper waters to sample thick, multi-year sea ice and take samples within and beneath the ice.

More than 40 scientists will spend five weeks at sea sampling the physical, chemical, and biological characteristics of the ocean and sea ice. A variety of instruments will be used onboard the Healy and deployed into the ocean and on the sea ice.

An automated microscope onboard will take continuous digital photographs of phytoplankton cells for near-real time observations of the quantity of different species. Floats with near-real time satellite communication will be placed in the ocean to measure temperature and various biological and optical properties. Scientists also will work on the sea ice several hundred yards from the ship to study the condition of the ice and sample the ocean ecosystem beneath it.


See how Arctic sea ice shrinks from January to September 2008
in this animation using data from NASA’s Aqua satellite.

Satellite observations are a key part of the ICESCAPE mission. NASA uses its satellite observations to monitor the microscopic plant and animal life in the world’s oceans. This "ocean color" data gives scientists a global view of a critical ecosystem that regulates the flow of carbon into and out of the sea. Similar observations of the Arctic waters collected from the Healy during ICESCAPE will be used to improve the accuracy of the satellite data over the entire region.

ICESCAPE is sponsored by the Earth Science Division’s Cryospheric Sciences and Ocean Biology and Biogeochemistry programs in NASA’s Science Mission Directorate. A second ICESCAPE voyage is planned for 2011.