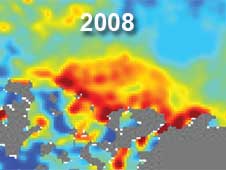 ICESat measurements of the distribution of winter sea ice thickness over the Arctic Ocean in 2008. Click link for measurements between 2004 and 2008, along with the corresponding trends in overall, multi-year and first-year winter ice thickness. Credit: Ron Kwok, NASA/JPL.
Full image: Trends in winter sea ice thickness
› Related images PASADENA, Calif. – Arctic sea ice thinned dramatically between the winters of 2004 and 2008, with thin seasonal ice replacing thick older ice as the dominant type for the first time on record. The new results, based on data from a NASA Earth-orbiting spacecraft, provide further evidence for the rapid, ongoing transformation of the Arctic's ice cover.

Scientists from NASA and the University of Washington in Seattle conducted the most comprehensive survey to date using observations from NASA's Ice, Cloud and land Elevation Satellite, known as ICESat, to make the first basin-wide estimate of the thickness and volume of the Arctic Ocean's ice cover. Ron Kwok of NASA's Jet Propulsion Laboratory in Pasadena, Calif., led the research team, which published its findings July 7 in the Journal of Geophysical Research-Oceans.

The Arctic ice cap grows each winter as the sun sets for several months and intense cold ensues. In the summer, wind and ocean currents cause some of the ice naturally to flow out of the Arctic, while much of it melts in place. But not all of the Arctic ice melts each summer; the thicker, older ice is more likely to survive. Seasonal sea ice usually reaches about 2 meters (6 feet) in thickness, while multi-year ice averages 3 meters (9 feet).

Using ICESat measurements, scientists found that overall Arctic sea ice thinned about 0.17 meters (7 inches) a year, for a total of 0.68 meters (2.2 feet) over four winters. The total area covered by the thicker, older "multi-year" ice that has survived one or more summers shrank by 42 percent.

Previously, scientists relied only on measurements of area to determine how much of the Arctic Ocean is covered in ice, but ICESat makes it possible to monitor ice thickness and volume changes over the entire Arctic Ocean for the first time. The results give scientists a better understanding of the regional distribution of ice and provide better insight into what is happening in the Arctic.

"Ice volume allows us to calculate annual ice production and gives us an inventory of the freshwater and total ice mass stored in Arctic sea ice," said Kwok. "Even in years when the overall extent of sea ice remains stable or grows slightly, the thickness and volume of the ice cover is continuing to decline, making the ice more vulnerable to continued shrinkage. Our data will help scientists better understand how fast the volume of Arctic ice is decreasing and how soon we might see a nearly ice-free Arctic in the summer."

In recent years, the amount of ice replaced in the winter has not been sufficient to offset summer ice losses. The result is more open water in summer, which then absorbs more heat, warming the ocean and further melting the ice. Between 2004 and 2008, multi-year ice cover shrank 1.54 million square kilometers (595,000 square miles) -- nearly the size of Alaska's land area.

During the study period, the relative contributions of the two ice types to the total volume of the Arctic's ice cover were reversed. In 2003, 62 percent of the Arctic's total ice volume was stored in multi-year ice, with 38 percent stored in first-year seasonal ice. By 2008, 68 percent of the total ice volume was first-year ice, with 32 percent multi-year ice.

"One of the main things that has been missing from information about what is happening with sea ice is comprehensive data about ice thickness," said Jay Zwally, study co-author and ICESat project scientist at NASA's Goddard Space Flight Center in Greenbelt, Md. "U.S. Navy submarines provide a long-term, high-resolution record of ice thickness over only parts of the Arctic. The submarine data agree with the ICESat measurements, giving us great confidence in satellites as a way of monitoring thickness across the whole Arctic Basin."

The research team attributes the changes in the overall thickness and volume of Arctic Ocean sea ice to the recent warming and anomalies in patterns of sea ice circulation.

"The near-zero replenishment of the multi-year ice cover, combined with unusual exports of ice out of the Arctic after the summers of 2005 and 2007, have both played significant roles in the loss of Arctic sea ice volume over the ICESat record," said Kwok.

For images of the Arctic sea ice decline, visit: http://www.nasa.gov/topics/earth/features/icesat-20090707.html .