NASA scientists conducting an airborne campaign right now in the Arctic to monitor changes in sea ice and ice sheet thickness have a new tool. 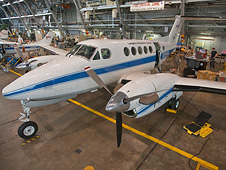 A second aircraft -- the King Air B200 -- arrived in Kangerlussuaq, Greenland, carrying an instrument that maps the icy surface from more than five miles (8 km) above, providing yet another perspective of Earth's changing polar regions.

The newest addition flew on April 13 to join Operation IceBridge -- a six-year airborne mission to monitor Earth's polar ice. The B200 will target the southeastern portion of the Greenland Ice Sheet, where NASA satellites have shown ice loss.

The flight marks the first trip to Greenland for the aircraft from NASA's Langley Research Center in Hampton, Va. The King Air is carrying the Land Vegetation and Ice Sensor (LVIS) instrument, a laser altimeter that can map large areas of sea ice and ice sheets.

IceBridge data provides a three-dimensional view of the Greenland Ice Sheet that will help predict future contributions to rising seas. A series of science flights designed to increase knowledge of ice sheet processes and sea level rise contributions are scheduled for April 15 through May 9.

Current estimates of sea level rise from Greenland are placed at .5 millimeters annually.

The B200 flights complement sea ice flights by the P-3B aircraft out of NASA's Wallops Flight Facility in Wallops Island, Va. The P-3B has been in Greenland since March 14. Flights were conducted from Thule for the first part of the mission and then out of Kangerlussuaq since April 1.

The P-3B is carrying a suite of instruments including a magnetometer, gravimeter, Airborne Topographic Mapper and camera systems. 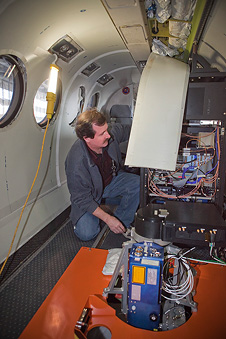 From the outside the King Air looks like it could carry a dozen passengers, but inside, it is much smaller. There is only room onboard for a pilot, a crew member and one scientist.

"Being the only instrument on the plane gives us a lot of flexibility to optimize the flight plan to best utilize the unique capabilities of LVIS," said Bryan Blair, LVIS principal investigator from NASA's Goddard Space Flight Center in Greenbelt, Md. "LVIS works best at higher altitudes and the B200 is a very good platform for operating at 28,000 feet (8,534 m) for up to five hours."

Being small also has its disadvantages. There is less room to carry fuel and equipment and the flight crew must wear thermal dry suits in case of a loss of power over water. The U.S. Coast Guard immersion suits they wear are designed to keep them alive for 12 to 24 hours in freezing cold Arctic waters.

Operating on the King Air is a big change from other NASA planes used in previous IceBridge campaigns, such as the DC-8 and P3-B from getting the instrument integrated onto the smaller aircraft to having just one person fly along with it during the mission, said David Rabine, LVIS Instrument Engineer at Goddard.

The flights will be a little tougher than past flights on larger planes. There's no bathroom on the King Air and no room to walk around. No microwave or leather seats either, Rabine said.

The twin-turboprop engine plane was built in 1982, but came to NASA Langley from NASA's Marshall Space Flight Center in January 1996. Many of its science flights have been geared toward atmospheric studies. This mission is a new venture for the King Air crew.

"This is one of our biggest projects," said Howard Lewis, director of Langley's Flight Research Services Directorate. "We've got a lot of Goddard instrument flights coming up."

The King Air flight plans will take LVIS to high altitudes, covering much of Greenland's coast and many of its outlet glaciers. Like all science flights, however, the King Air's flight plans are subject to weather and other changes or delays.

"It's a great airplane to do field missions with," said Dale Bowser, head of Langley's Research Systems Integration Branch.