Grow Text SizeShrink Text Size
A Snapshot of Sea Ice
The Arctic Ocean is covered by a dynamic layer of sea ice that grows each winter and shrinks each summer, reaching its yearly minimum size each fall. While the 2010 minimum remains to be seen, NASA's Aqua satellite captured this snapshot on Sept. 3. 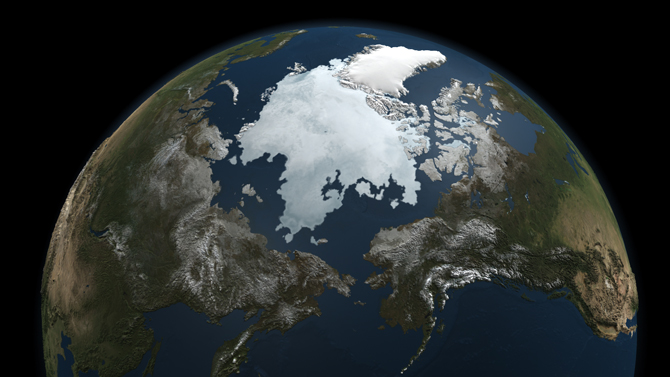 How does the Aqua satellite "see" sea ice? Microwaves. Everything on Earth’s surface -- including people -- emits microwave radiation, the properties of which vary with the emitter, thereby allowing the AMSR-E microwave sensor on Aqua to map the planet.

Ice emits more microwave radiation than water, making regions of the ocean with floating ice appear much brighter than the open ocean to the AMSR-E sensor. This difference allows the satellite to capture a sea ice record year-round, through cloud cover and the months of polar night. Continuous records are important because sea ice is dynamic. Besides melting and freezing, the ice moves with wind and currents which can cause it to split or pile up.

"The data from AMSR-E and other NASA satellites are critical for understanding the coupling between sea ice and the ocean and atmosphere," said Tom Wagner, Cryosphere program manager at NASA Headquarters in Washington. "It’s important for us to understand these connections to improve our predictive models of how the planet will change."

The Arctic sea ice is a major factor in the global climate system. The ice cools the planet by reflecting sunlight back into space. It also helps drive ocean circulation by converting the warm Pacific water that flows into the Arctic into the cold, saltier water that empties into the Atlantic. The sea ice also fundamentally shapes the Arctic; defining the organisms that make up its ecosystem and keeping heat from the ocean from melting the frozen tundra.

In fall 2009, Arctic sea ice reached its minimum extent on about Sept. 12, and was the third lowest since satellite microwave measurements were first made in 1979. Researchers are interested in year-to-year changes, which can be highly variable, so that scientists need many years, even decades, of data to examine long-term trends. Notably, all of the major minimums have occurred in the last decade, consistent with other NASA research, which shows January 2000 to December 2009 was the warmest decade on record.

As the sea ice nears the 2010 minimum later this month, look for images and analysis from NASA and the National Snow and Ice Data Center, in Boulder, Colo.