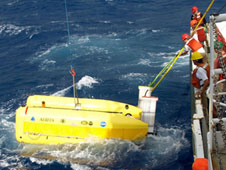 A team recovers the hybrid robotic vehicle Nereus aboard the research vessel Cape Hatteras during a partially NASA-funded expedition to the Mid-Cayman Rise in October 2009. A search for new hydrothermal vent sites along the 110-kilometer-long ridge, the expedition featured the first use of Nereus in "autonomous," or free-swimming, mode. Image credit: Woods Hole Oceanographic Institution
› Larger image


An expedition partially funded by NASA, part of a program to search extreme environments for geological, biological and chemical clues to the origins and evolution of life, has discovered the deepest known hydrothermal vent in the world, nearly 5,000 meters (16,400 feet) below the surface of the western Caribbean Sea. The research will help extend our understanding of the limits to which life can exist on Earth and help prepare for future efforts to search for life on other planets.

An interdisciplinary team led by Woods Hole Oceanographic Institution, Woods Hole, Mass., and including research scientist Max Coleman of NASA's Jet Propulsion Laboratory, Pasadena, Calif., sailed to the western Caribbean in October 2009 aboard the research vessel Cape Hatteras. Using sensors mounted on equipment and robotic vehicles, they searched for deep-sea hydrothermal vents along the 110-kilometer-long (68-mile-long) Mid-Cayman Rise, an ultra-slow spreading ridge located in the Cayman Trough -- the deepest point in the Caribbean Sea. Results of their research are published this week in the Proceedings of the National Academy of Sciences.

While high-temperature submarine vents were first discovered more than 30 years ago, the majority of the global Mid-Ocean Ridge, an underwater mountain range that snakes its way for more than 56,000 kilometers (35,000 miles) between Earth's continents, remains unexplored for hydrothermal activity. While such activity occurs on spreading centers all around the world, scientists are particularly interested in Earth's ultra-slow spreading ridges, like the Mid-Cayman Rise, which may host systems that are particularly relevant to pre-biotic chemistry and the origins of life. The Mid-Cayman Rise is part of the tectonic boundary between the North American and Caribbean Plates. At the boundary where the plates are being pulled apart, new material wells up from Earth's interior to form new crust on the seafloor.

The researchers found that the Mid-Cayman Rise hosts at least three discrete hydrothermal sites, each representing a different type of water-rock interaction. The diversity of the newly discovered vent types, their geologic settings and their relative geographic isolation make the Mid-Cayman Rise a unique environment in the world's ocean.

"This was probably the highest-risk expedition I have ever undertaken," said chief scientist Chris German, a Woods Hole Oceanographic Institution geochemist who has pioneered the use of autonomous underwater vehicles to search for hydrothermal vent sites. "We know hydrothermal vents appear along ridges approximately every 100 kilometers [62 miles]. But this ridge crest is only 100 kilometers long, so we should only have expected to find evidence for one site at most. So finding evidence for three sites was quite unexpected - but then finding out that our data indicated that each site represents a different style of venting - one of every kind known, all in pretty much the same place - was extraordinarily cool."

The team identified the deepest known hydrothermal vent site and two additional distinct types of vents, one of which is believed to be a shallow, low-temperature vent of a kind that has been reported only once previously - at the "Lost City" site in the mid-Atlantic Ocean.

"Being the deepest, these hydrothermal vents support communities of organisms that are the furthest from the ocean surface and sources of energy like sunlight," said JPL co-author Coleman. "Most life on Earth is sustained by food chains that begin with sunlight as their energy source. That's not an option for possible life deep in the ocean of Jupiter's icy moon Europa, prioritized by NASA for future exploration. However, organisms around the deep vents get energy from the chemicals in hydrothermal fluid, a scenario we think is similar to the seafloor of Europa, and this work will help us understand what we might find when we search for life there."

"We were particularly excited to find compelling evidence for high-temperature venting at almost 5,000 meters depth," said Julie Huber, a scientist in the Josephine Bay Paul Center at the Marine Biological Laboratory in Woods Hole. "We have absolutely zero microbial data from high-temperature vents at this depth." Huber and Marine Biological Laboratory postdoctoral scientist Julie Smith participated in this cruise to collect samples, and all of the microbiology work for this paper was carried out in Huber's laboratory. "With the combination of extreme pressure, temperature and chemistry, we are sure to discover novel microbes in this environment," Huber added. "We look forward to returning to the Cayman and sampling these vents in the near future. We are sure to expand the known growth parameters and limits for life on our planet by exploring these new sites."

For more on this research, read the full news release from Woods Hole Oceanographic Institution: http://www.whoi.edu/page.do?pid=7545&tid=282&cid=78266&ct=162