The TRMM satellite has now been making highly accurate measurements of rainfall from space for fifteen years since it launched in Nov. 1997. TRMM is a joint mission between NASA and the Japanese space agency, JAXA.

TRMM can be used to calibrate rainfall estimates from other satellites. Those rainfall data are routinely created and stored at NASA's Goddard Space Flight Center in Greenbelt, Md. The TRMM-based, near-real time Multi-satellite Precipitation Analysis (TMPA) created at NASA Goddard can be used to analyze rainfall over a wide portion of the globe.

Using the TMPA data, Hal Pierce of the TRMM team at NASA Goddard created an animation that shows the estimated amount of rain contributed by named tropical cyclones over the western Atlantic in 2012. The animation begins on May 19, 2012, with the formation of Tropical Storm Alberto off the coast of South Carolina and progresses through Hurricane Sandy on Oct. 29.

Several areas of the western Atlantic suffered from the destructive winds and deadly flooding that accompanied tropical cyclones during the 2012 Atlantic hurricane season. The season started with tropical storms Alberto, Beryl and Debby forming near southeastern states. Alberto and Beryl develop in May before the season even officially began (it starts on June 1). The only major hurricane this season was Hurricane Michael, a Category 3 storm that stayed over the open Atlantic.

By the end of the season much of the eastern United States from the Louisiana coast through New York had received some rainfall from tropical cyclones. Beryl and Debby both affected Florida. Hurricane Isaac caused deadly flooding along the Gulf coast but also resulted in some drought relief in the Midwest. Hurricane Sandy was only a category two hurricane but caused numerous deaths and record breaking destruction extending from the Caribbean to the Mid-Atlantic and northeastern United States. 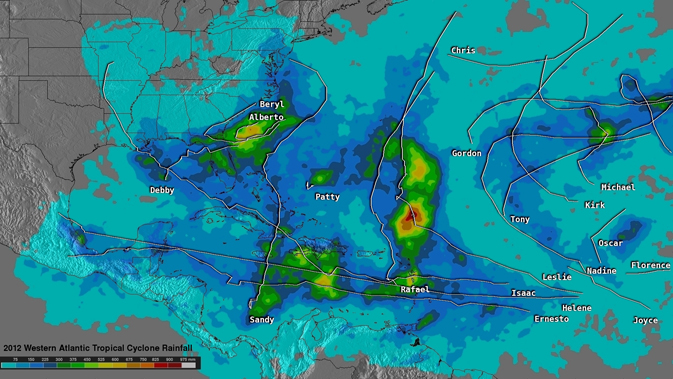 The highest amounts of rainfall in this analysis appeared over the Atlantic Ocean, northeast of Puerto Rico in an area called "Hurricane Alley." The highest rainfall total seen on this animation was about 975 millimeters (38.39 inches) from hurricanes Leslie and Rafael that tracked over that area. Of that total, Leslie only produced about 675 mm. Warm ocean waters in this area supply the energy to form and sustain hurricanes.

Hurricane Nadine, the fifth longest-lived Atlantic hurricane on record, occurred in the eastern Atlantic Ocean and isn't shown in this analysis. The TRMM satellite frequently flew above when Nadine was active from Sept. 11, 2012 to Oct. 4, 2012.

According to NOAA, a well-established climate pattern has indicated that the Atlantic Ocean is in an ongoing era of high activity for hurricanes that began in 1995. Since that time, more than 70 percent of seasons have been above normal, including 2012.

For NASA's History of all storms in the 2012 Hurricane Seasons, visit: