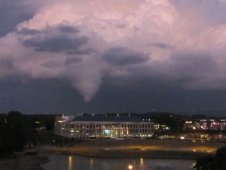 An EF-2 tornado forms over the University of Alabama campus in Huntsville, Ala., on Jan. 21, 2010. Image Credit: UAH/Christopher Schultz
View large image 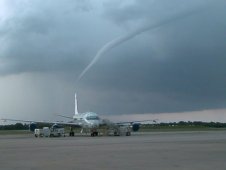 A waterspout forms over the St. Johns River behind a NASA DC-8 on the tarmac of the Jacksonville Naval Air Station on August 18, 2001. Image Credit: NASA/MSFC/GHC/Richard Blakeslee
View large image 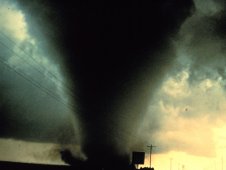 The evening sky above Huntsville, Ala., held an eerie look on Thursday, Jan. 21, but few knew looming overhead was an EF-2 tornado waiting to descend on a downtown neighborhood. The Huntsville storm system didn't produce an abnormally large amount of lightning, typically a key indicator of severe weather, and the weather community was focused on larger hail-producing thunderstorms moving through southern Tennessee that looked more threatening.

Scientists at NASA's Marshall Space Flight Center in Huntsville are studying these recent storms by looking at data from three unique weather monitoring tools to gain a better picture of how storms evolve to produce both heavy rain or large hail, and subsequent strong winds or tornadoes. Researchers are using observations from the Advanced Radar for Meteorological and Operational Research, or ARMOR, radar operated by the University of Alabama Huntsville and NASA Lightning-Mapping Array System and disdrometer data to understand storm precipitation types -- rain, snow or hail -- and how those amounts relate to the amount of lightning produced. This early storm research supports the development of future weather monitoring systems like the Geostationary Operational Environmental Satellite, or GOES-R, that will observe Earth's weather from space.

A better understanding of these storm system could be the difference in a more accurate and timely prediction and would have been useful on Jan. 21. The tornado was later classified as an EF-2 as defined by the Enhanced Fujita Scale, created by Dr. T. Theodore Fujita in 1971, which categorizes each tornado by intensity and area and estimated wind speed associated with the resultant damage. Southern states typically view early spring as tornado season, but they can occur any time of year if the conditions are right. They usually form around violent thunderstorms where there is sufficient instability and wind shear in the lower atmosphere.

"In order to predict severe weather you have to understand how a storm works, and to understand how they work you need to make measurements and observations," said Dr. Walt Petersen, a physical scientist at the Marshall Center. "In terms of societal impacts, we need to be able to reliably measure and predict the occurrence of things like rainfall, lightning and tornadoes to offer more timely warnings."

The ARMOR radar helps scientists understand precipitation processes in the storm from the ground to the top. ARMOR remotely takes precipitation measurements since it is not possible to get to the high-altitude core of these monstrous storms. The analysis of the radar data starts by examining particle size information collected by disdrometers at the surface. Using this information, Petersen and his colleagues can calibrate the ARMOR low-elevation scans and then extend the calibration to look higher in the storm. This enables scientists to diagnose the precipitation particle sizes and shapes at the base and higher into the storm.

The internal precipitation properties of the storm are then compared to lightning production. Lightning data is taken from the Lightning Mapping Array system that collects lightning measurements from a set of 10 antennas positioned around northern Alabama. The lightning array senses the radiation emitted by lightning flashes in the very high frequency bands between the 60 to 100 megahertz range. The resultant data provide scientists with a three-dimensional location for each lightning flash within a given thunderstorm and those locations can be compared to ARMOR radar data collected for the same part of the storm.

ARMOR is a dual-polarimetric Doppler radar meaning that it works by transmitting pulses of microwave energy in vertical and horizontal orientations that are then scattered back to the radar in the same orientations. From the echo, or return of the horizontally and vertically oriented radar pulses, scientists can measure specific properties of the precipitation within a given cloud including the particle size, shape and type, as well as the precipitation rate and the relative velocity of the wind that is moving those precipitation particles either toward or away from the radar, or the Doppler-shifted wind. Disdrometer data is also collected to provide information on individual precipitation particle sizes, shapes and numbers -- they connect what is going on at the particle scale to what scientists observe in the beam of the radar.

"To provide reliable and timely predictions, scientists need to understand the entire storm system by observing and measuring the physics of each process and how they are related," said Petersen. "We are attempting to do this by combining radar, lightning and disdrometer data for analysis. By studying all these data points together we're able to connect the dots between precipitation formation, properties, and movement, and the development of dangerous weather phenomena such as large hail, lightning and tornadoes."

NASA continues to develop advanced satellite platforms that can carry instruments to remotely sense thunderstorms from space. Currently, the joint NASA/Japanese Aerospace Exploration Agency, or JAXA, Tropical Rainfall Measuring Mission satellite launched in 1997 and flying the first and only precipitation radar in space, is able to measure the three-dimensional structure of storms, while NASA’s Aqua satellite provides information on the horizontal structure of precipitation as well as environmental temperature and humidity. However, these satellites get only occasional snapshots of storms rather than the continuous coverage needed.

Scientists need to know what's happening inside the storm systems as they are taking place. NASA is currently working to develop new instruments and techniques to support weather and climate studies for the GOES-R satellite Geostationary Lightning Mapper, a joint effort with the National Oceanic and Atmospheric Administration that will launch in 2015, and the NASA/JAXA Global Precipitation Measurement mission that will launch in 2013.

The ARMOR radar and Northern Alabama lightning-mapping array projects represent collaborative efforts between Marshall and team members and partners from the University of Alabama in Huntsville. These efforts are funded in part by the NOAA/NASA GOES-R satellite program, NASA’s Tropical Rainfall Measuring Mission and Global Precipitation Measurement Mission, all managed by NASA’s Goddard Space Flight Center in Greenbelt, Md.