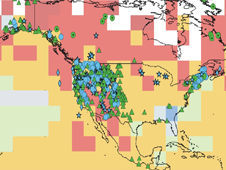 Areas of significant changes to Earth systems observed in North America over the last 20 years, represented by various symbols, are linked with areas of rising temperatures, noted in red. Credit: NASA
> Larger image
A new NASA-led study shows that human-caused climate change has impacted a wide range of Earth's natural systems, from permafrost thawing to plants blooming earlier across Europe to lakes declining in productivity in Africa.

Cynthia Rosenzweig of NASA's Goddard Institute for Space Science in New York and scientists at 10 other institutions have linked physical and biological impacts since 1970 with rises in temperatures during that period. The study, published May 15 in the journal Nature, concludes that human-caused warming is resulting in a broad range of impacts across the globe.

"This is the first study to link global temperature data sets, climate model results, and observed changes in a broad range of physical and biological systems to show the link between humans, climate, and impacts," said Rosenzweig, lead author of the study.

Rosenzweig and colleagues also found that the link between human-caused climate change and observed impacts on Earth holds true at the scale of individual continents, particularly in North America, Europe, and Asia. 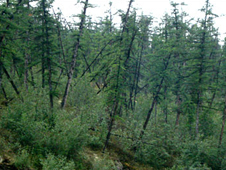 When permafrost melts, the layer of loose soil deepens and trees lose their foundations and tip over. Similar impacts across Earth are likely due to human-caused climate change. Credit: Jon Ranson To arrive at the link, the authors built and analyzed a database of more than 29,000 data series pertaining to observed impacts on Earth's natural systems, collected from about 80 studies each with at least 20 years of records between 1970 and 2004. Observed impacts included changes to physical systems, such as glaciers shrinking, permafrost melting, and lakes and rivers warming. Impacts also included changes to biological systems, such as leaves unfolding and flowers blooming earlier in the spring, birds arriving earlier during migration periods, and ranges of plant and animal species moving toward the poles and higher in elevation. In aquatic environments such as oceans, lakes, and rivers, plankton and fish are shifting from cold-adapted to warm-adapted communities.

The team conducted a "joint attribution" study in which they showed, first, that at the global scale, about 90 percent of observed changes in diverse physical and biological systems are consistent with warming. Other driving forces, such as land use change from forest to agriculture, were ruled out as having significant influence on the observed impacts.

Next, the scientists conducted statistical tests and found that the spatial patterns of observed impacts closely match temperature trends across the globe, to a degree beyond what can be attributed to natural variability. So, the team concluded that observed global-scale impacts are very likely due to human-caused warming. 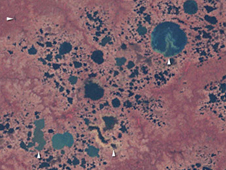 Impacts from warming are evident in satellite images showing that lakes in Siberia disappearing as the permafrost thaws and lake water drains deeper into the ground. Credit: NASA Earth Observatory
> Larger image "Humans are influencing climate through increasing greenhouse gas emissions and the warming is causing impacts on physical and biological systems that are now attributable at the global scale and in North America, Europe, and Asia," said Rosenzweig.

On other continents, including Africa, South America, and Australia, documentation of observed changes in physical and biological systems is still sparse despite warming trends attributable to human causes. The authors concluded that environmental systems on these continents need additional research, especially in tropical and subtropical areas where there is a lack of impact data and published studies. Leslie McCarthy
NASA's Goddard Institute for Space Studies, N.Y.
› Back To Top