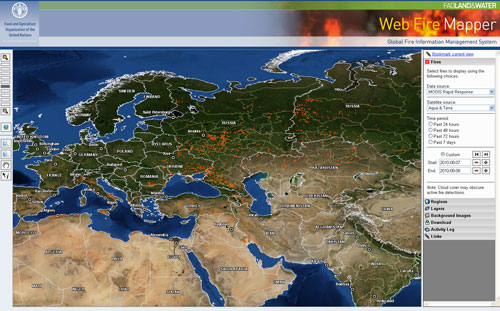 The Global Fire Information Management System (GFIMS) delivers fire data from an imaging sensor aboard NASA's Terra and Aqua satellites to generate daily fire maps and images through a freely accessible Web interface. The system also dispatches detailed email alerts of the quantity and coordinates of fires, and it does so less than three hours after a satellite passes over burning land.

"Man has been harnessing fire since prehistory. In fact, some refer to humans as the fire species," said program scientist Woody Turner of NASA's Headquarters in Washington who oversaw funding for the system's development. "But now we've got a daily overview of large fires around the world, enabling us to manage fire—and our uses of fire—better."

At the heart of the new capability is NASA's Moderate Resolution Imaging Spectroradiometer (MODIS), an instrument that scans the entire planet from north to south poles every 1-2 days and relays remotely sensed fire data to NASA's MODIS Rapid Response team at NASA's Goddard Space Flight Center in Greenbelt, Md.

MODIS looks for characteristic signatures of fire based on brightness temperature from thermal radiation given off by flames, eliminates false detections of other hot areas that may be deserts or sunglint with different degrees of brightness, and flags image pixels that confirm an active fire. The team then processes data into photo-quality images of active fires.

"When I worked at Etosha National Park in Namibia -- before the MODIS imager existed – we had to painstakingly process satellite data manually, which took many hours on some days," said Diane Davies, a University of Maryland – College Park researcher and former principal investigator for the system. The time-consuming process often led to inefficient deployment of fire and rescue resources and inconsistent communications between officials.

With funding from NASA's Applied Sciences Program, scientists at the University of Maryland-College Park began developing the Fire Information for Resource Management System (FIRMS) in 2006 to test whether they could quickly convert satellite snapshots of wildfires into user-friendly formats.

The system combines images with Geographical Information Systems (commonly called GIS) technology to distribute fire hotspot email alerts and other products -- downloadable fire images; fire locations that can be overlaid on Google Earth maps; customizable interactive fire mapping where users can bookmark locations of fire interest; and maps from NASA's own Google Earth-like World Wind plug-in -- to organizations like the Food and Agriculture Organization as well as Conservation International.

Beyond the scope of its precursor's capability, the new UN detection system also provides country-specific reports. "Having this kind of information served up to us in an email every day is a huge advance," said Davies. The new GFIMS Web tool was officially launched on August 12, though many people have been accessing MODIS fire data through the University of Maryland’s prototype FIRMS system for over a year. More than 29,000 visitors found the site on Aug. 9 alone, seeking information on the wildfires burning through more than 300 square miles of Russia's landscape.

When fires burn, smoke plumes carrying carbon monoxide and other tiny polluted particles can span hundreds of miles across populated areas. The plume in Russia, in fact, ran 1,860 miles from east to west last month. Eager to understand better the nature of fires, scientists are already putting the UN's system to use researching regional fires like Russia's and trends associated with climate change.

"Knowing how many fires are in an area during any 24-hour period and their coordinates is absolutely invaluable in saving lives, farms and homes, especially in remote places," said Turner. "The fact that the system also helps us document fires for research purposes is an added benefit."

The new FAO site includes information in English, French and Spanish, with other languages on the horizon in the months to come. Davies also expects to add maps and alerts of previously burned areas this fall, in addition to locations experiencing active fires.