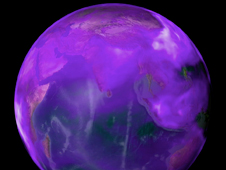 Tiny air pollution particles commonly called soot, but also known as black carbon, are in the air and on the move throughout our planet. The Indo-Gangetic plain, one of the most fertile and densely populated areas on Earth, has become a hotspot for emissions of black carbon (shown in purple and white). Winds push thick clouds of black carbon and dust, which absorb heat from sunlight, toward the base of the Himalayas where they accumulate, rise, and drive a "heat pump" that affects the region's climate. Please click on image to view animation. Credit: NASA Soot from fire in an unventilated fireplace wafts into a home and settles on the surfaces of floors and furniture. But with a quick fix to the chimney flue and some dusting, it bears no impact on a home’s long-term environment.

A new modeling study from NASA confirms that when tiny air pollution particles we commonly call soot – also known as black carbon – travel along wind currents from densely populated south Asian cities and accumulate over a climate hotspot called the Tibetan Plateau, the result may be anything but inconsequential.

In fact, the new research, by NASA’s William Lau and collaborators, reinforces with detailed numerical analysis what earlier studies suggest: that soot and dust contribute as much (or more) to atmospheric warming in the Himalayas as greenhouse gases. This warming fuels the melting of glaciers and could threaten fresh water resources in a region that is home to more than a billion people.

Lau explored the causes of rapid melting, which occurs primarily in the western Tibetan Plateau, beginning each year in April and extending through early fall. The brisk melting coincides with the time when concentrations of aerosols like soot and dust transported from places like India and Nepal are most dense in the atmosphere.

"Over areas of the Himalayas, the rate of warming is more than five times faster than warming globally," said William Lau, head of atmospheric sciences at NASA’s Goddard Space Flight Center in Greenbelt, Md. "Based on the differences it’s not difficult to conclude that greenhouse gases are not the sole agents of change in this region. There’s a localized phenomenon at play." 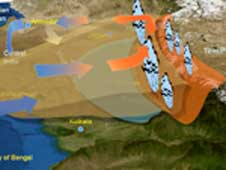 > View animation
Tiny, dark-colored aerosols — specifically black carbon — travel along wind currents from Asian cities and accumulate over the Tibetan Plateau and Himalayan foothills. Seen here as a light brown mass, these brown clouds of soot absorb sunlight, creating a layer of warm air (seen in orange) that rises to higher altitudes, amplifying the melting of glaciers and snow. Credit: NASA/Sally Bensusen Nicknamed the “Third Pole”, the region in fact holds the third largest amount of stored water on the planet beyond the North and South Poles. But since the early 1960s, the acreage covered by Himalayan glaciers has declined by over 20 percent. Some Himalayan glaciers are melting so rapidly, some scientists postulate, that they may vanish by mid-century if trends persist. Climatologists have generally blamed the build-up of greenhouse gases for the retreat, but Lau’s work suggests that may not be the complete story.

He has produced new evidence suggesting that an “elevated heat pump” process is fueling the loss of ice, driven by airborne dust and soot particles absorbing the sun’s heat and warming the local atmosphere and land surface. A related modeling study by Lau and colleagues has been submitted to Environmental Research Letters for publication.

A unique landscape plays supporting actor in the melting drama. The Himalayas, which dominate the plateau region, are the source of meltwater for many of Asia’s most important rivers—the Ganges and Indus in India, the Brahmaputra in Bangladesh, the Salween through China, Thailand and Burma, the Mekong across Laos, Cambodia and Vietnam, and the Yellow and Yangtze rivers in China. When fossil fuels are burned without enough oxygen to complete combustion, one of the byproducts is black carbon, an aerosol that absorbs solar radiation (Most classes of aerosols typically reflect incoming sunlight, causing a cooling effect). Rising populations in Asia, industrial and agricultural burning, and vehicle exhaust have thickened concentrations of black carbon in the air.

Sooty black carbon travels east along wind currents latched to dust – its agent of transport – and become trapped in the air against Himalayan foothills. The particles’ dark color absorbs solar radiation, creating a layer of warm air from the surface that rises to higher altitudes above the mountain ranges to become a major catalyst of glacier and snow melt.

Building on work by Veerabhardran Ramanathan of the Scripps Institution of Oceanography, San Diego, Calif., Lau and colleagues conducted modeling experiments that simulated the movement of air masses in the region from 2000 to 2007. They also made detailed numerical analyses of how soot particles and other aerosols absorb heat from the sun.

"Field campaigns with ground observations are already underway with more planned to test Lau’s modeling results," said Hal Maring who manages the Radiation Sciences program at NASA Headquarters in Washington. "But even at this stage we should be compelled to take notice."

“Airborne particles have a much shorter atmospheric lifespan than greenhouse gases,” continued Maring. “So reducing particle emissions can have much more rapid impact on warming.”

"The science suggests that we’ve got to better monitor the flue on our 'rooftop to the world," said Lau. "We need to add another topic to the climate dialogue."