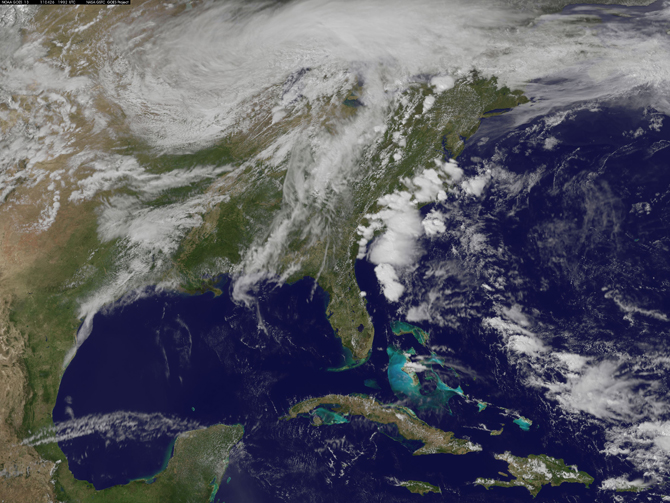 › View larger The GOES-13 Satellite captured a visible image of the system today as daytime heating was boiling up strong and severe thunderstorms. Credit: NOAA/NASA/GOES

A low pressure area currently over northern Illinois and southern Wisconsin has created conditions that call for a forecast of severe weather in the eastern third of the U.S. today and one area is even labeled "high risk." The GOES-13 Satellite captured a visible image of the system today as daytime heating was boiling up strong and severe thunderstorms.

What's unusual about the system is that there are a handful of days where a "high risk" for severe weather is noted by NOAA's National Severe Storms Laboratory (NSSL). Today, April 26, 2011 is one of them. The high risk area includes southern Arkansas, extreme northwest Louisiana and extreme northeastern Texas. A moderate level of risk surrounds that area and stretches from west Tennessee, including Memphis, all of eastern Arkansas, northwest Louisiana and further into northeastern Texas. A slight risk for severe thunderstorms stretches from western Massachusetts through New York, the Appalachian Mountains to the Ohio Valley, Tennessee Valley and through the southeast west toward Texas. See risk map

The NSSL noted that flash flooding from the thunderstorms is possible from the area of the front from southwestern Indiana through western Kentucky, western Tennessee, southeastern Missouri, Arkansas and northwestern Mississippi. Severe thunderstorms are possible in those areas today. This storm already has a history of dumping heavy rainfall as the central Mississippi Valley reported up to half a foot of rain from the system and the lower Mississippi Valley experienced as much as a foot in some areas.

As the severe weather threat will continue over the Lower Mississippi and Tennessee valleys over the next couple of days, you can find continually updated GOES satellite imagery from NASA's GOES project page at: http://goes.gsfc.nasa.gov.