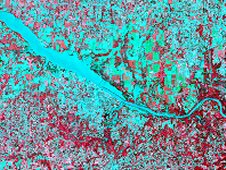 A composite of two ASTER views over North Alabama taken May 5. The image extends from near the Tennessee border line to Jasper, Ala. Several tornado tracks are evident, including the Phil Campbell to Harvest track. These tracks are not as obvious as the Tuscaloosa tornado track. This is not because of a difference in intensity, but from the underlying surface over which the tornadoes occurred. (NASA)
View large image 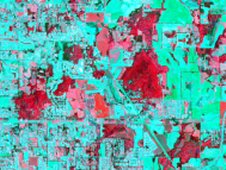 NASA's Terra satellite, part of the Earth Observing System of satellites, captured images of the damage path. An instrument aboard Terra called the Advanced Spaceborne Thermal Emission and Reflection Radiometer, or ASTER, was used to discern vegetation contrasts over the region.

"This is the first time ASTER data has been applied to such a massive outbreak of storms," said Gary Jedlovec, atmospheric scientist at Marshall Space Flight Center. "The usefulness of satellite information in providing improved accuracy along with damage assessment in severe weather events continues to evolve."

The tornado track signature observed by ASTER is seen as a disruption in the vegetation or other reflective surfaces over a region caused by tornado winds. Uprooted trees quickly stop the process of photosynthesis and change color -- this is easily detected by satellite.

However, detecting damage in areas outside of heavy forestland is challenging.

In Madison and Limestone counties much of the area scarred by the tornadoes are agricultural in nature. Fields are either pasture land or row crops -- therefore the effect of tornado winds is minimal and the mark on satellite imagery is suppressed.

While this indicates a limitation to the use of this particular image analysis for tornado track detection over primarily agricultural land use, the SPoRT team is exploring the use of temperature channels from ASTER to better identify damage marks on Earth's surface. Terra/ASTER is a joint activity between NASA's Science Mission Directorate Earth Science Division and Japan's Ministry of Economy, Trade and Industry. Terra is one of 14 NASA satellites that look at the Earth to study and understand changes in the Earth system and provide societal benefits.