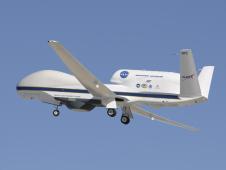 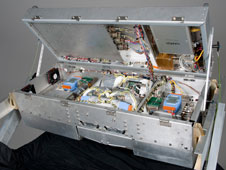 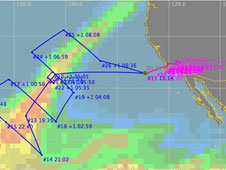 Overview of flight path for the first WISPAR science flight on Feb. 11, 2011. The Global Hawk will be flown over an atmospheric river developing in the Pacific off Hawaii. Image credit: NOAA
› Larger view

They're called atmospheric rivers - narrow regions in Earth's atmosphere that transport enormous amounts of water vapor across the Pacific or other regions. Aptly nicknamed "rivers in the sky," they can transport enough water vapor in one day, on average, to flood an area the size of Maryland 0.3 meters (1 foot) deep, or about seven times the average daily flow of water from the Mississippi River into the Gulf of Mexico. The phenomenon was the subject of a recent major emergency preparedness scenario led by the U.S. Geological Survey, "ARkStorm," which focused on the possibility of a series of strong atmospheric rivers striking California - a scenario of flooding, wind and mudslides the USGS said could cause damages exceeding those of Hurricane Katrina in 2005.

While atmospheric rivers are responsible for great quantities of rain that can produce flooding, they also contribute to beneficial increases in snowpack. A series of atmospheric rivers fueled the strong winter storms that battered the U.S. West Coast from western Washington to Southern California from Dec. 10 to 22, 2010, producing 28 to 64 centimeters (11 to 25 inches) of rain in certain areas. The atmospheric rivers also contributed to the snowpack in the Sierras, which received 75 percent of its annual snow by Dec. 22, the first full day of winter.

To improve our understanding of how atmospheric rivers form and behave and evaluate the operational use of unmanned aircraft for investigating these phenomena, NASA scientists, aircraft and sensors will participate in a National Oceanic and Atmospheric Administration-led airborne field campaign slated to begin Feb. 11.

A NASA Global Hawk unmanned aircraft operated out of NASA's Dryden Flight Research Center in Southern California is scheduled to depart Dryden Friday morning, Feb. 11, on the campaign's first science flight. The 24-hour flight will study an atmospheric river currently developing in the Pacific Ocean off Hawaii that appears as though it will impact the Oregon-California coast this weekend. Aboard the Global Hawk will be new weather reconnaissance devices called dropsondes developed by the National Center for Atmospheric Research that will take temperature, wind and other readings as they descend through an atmospheric river. Also aboard will be an advanced water vapor sensor - the High-Altitude Monolithic Microwave Integrated Circuit Sounding Radiometer, or HAMSR - created by NASA's Jet Propulsion Laboratory in Pasadena, Calif.

The remote-sensing HAMSR instrument analyzes the heat radiation emitted by oxygen and water molecules in the atmosphere to determine their density and temperature. The instrument operates at microwave frequencies that can penetrate clouds, enabling it to determine temperature, humidity and cloud structure under all weather conditions. This capability is critical for studying atmospheric processes associated with bad weather, like the conditions present during atmospheric river events.

HAMSR Principal Investigator Bjorn Lambrigtsen of JPL says the instrument - the most accurate and sensitive of its kind in the world - will help scientists better understand these unique weather phenomena.

"The WISPAR campaign is intended to study the concentrated streams of tropical moisture that sometimes get connected with cold fronts and winter storms approaching the U.S. West Coast - sometimes called the pineapple express, since they often originate near Hawaii - which can result in very intense rain events," Lambrigtsen said. "HAMSR, flying on NASA's unpiloted Global Hawk well above the weather but close enough to get a much more detailed picture than is possible from a satellite, will be used to map out this phenomenon and answer scientific questions about the formation and structure of these systems."

NASA's Global Hawk is an ideal platform from which to conduct WISPAR science because it is able to fly long distances, stay aloft for more than 24 hours and travel at high and low altitudes that could be dangerous for humans. Lambrigtsen will be at Dryden in the Global Hawk Operations Center during the flights, using data from the sensor and other information to adjust the Global Hawk's flight track, as necessary, to optimize the sampling of the atmospheric rivers.

Lambrigtsen said the public can monitor the progress of the WISPAR science flights in real time on a WISPAR version of JPL's hurricane portal website at http://winterscience.jpl.nasa.gov/WISPAR2011/ . The site will display the most recent satellite images, the Global Hawk flight track and a real-time subset of HAMSR data.