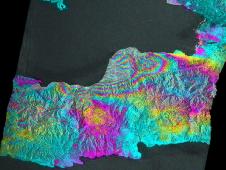 Radar interferogram image from the Japan Aerospace Exploration Agency’s Advanced Land Observing Satellite Phased Array type L-band Synthetic Aperture Radar (ALOS PALSAR), showing ground deformation from the Haiti earthquake in the city of Léogâne, west of Port-au-Prince. Image credit: NASA/JPL/JAXA/METI
› Full image and caption
The magnitude 7.0 earthquake that caused more than 200,000 casualties and devastated Haiti's economy in January resulted not from the Enriquillo fault, as previously believed, but from slip on multiple faults -- primarily a previously unknown, subsurface fault -- according to a study published online this week in Nature Geoscience.

In addition, because the earthquake did not involve slip near Earth's surface, the study suggests that it did not release all of the strain that has built up on faults in the area over the past two centuries, meaning that future surface-rupturing earthquakes in this region are likely.

Geophysicist Eric Fielding of NASA's Jet Propulsion Laboratory, Pasadena, Calif., along with lead author Gavin Hayes of the U.S. Geological Survey and other colleagues from USGS, the California Institute of Technology in Pasadena, the University of Texas at Austin, and Nagoya University, Japan, used a combination of seismological observations, geologic field data and satellite geodetic measurements to analyze the earthquake source. Initially the Haiti earthquake was thought to be the consequence of movement along a single fault -- the Enriquillo -- that accommodates the motion between the Caribbean and North American tectonic plates. But scientists in the field found no evidence of surface rupture on that fault.

The researchers found the pattern of surface deformation was dominated by movement on a previously unknown, subsurface thrust fault, named the Léogâne fault, which did not rupture the surface.

Fielding, who processed synthetic aperture radar interferometry data from a Japan Aerospace Exploration Agency (JAXA) satellite used in the study, said, "I was surprised when I saw the satellite data showed the Haiti earthquake must have ruptured a different fault than the major Enriquillo fault, which everybody expected was the source. Without the radar images, we might still be wondering what happened."

Fielding said NASA images acquired after the earthquake over the major fault zones of Hispaniola by the JPL-built Uninhabited Aerial Vehicle Synthetic Aperture Radar (UAVSAR) airborne instrument will give scientists much more detailed information should another large earthquake occur in the region in the future.