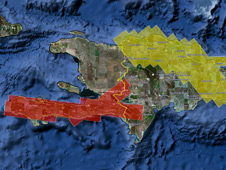 PASADENA, Calif. - In response to the disaster in Haiti on Jan. 12, NASA has added a series of science overflights of earthquake faults in Haiti and the Dominican Republic on the island of Hispaniola to a previously scheduled three-week airborne radar campaign to Central America.

"UAVSAR will allow us to image deformations of Earth's surface and other changes associated with post-Haiti earthquake geologic processes, such as aftershocks, earthquakes that might be triggered by the main earthquake farther down the fault line, and the potential for landslides," said JPL's Paul Lundgren, the principal investigator for the Hispaniola overflights. "Because of Hispaniola's complex tectonic setting, there is an interest in determining if the earthquake in Haiti might trigger other earthquakes at some unknown point in the future, either along adjacent sections of the Enriquillo-Plantain Garden fault that was responsible for the main earthquake, or on other faults in northern Hispaniola, such as the Septentrional fault." 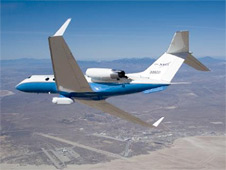 Lundgren says these upcoming flights, and others NASA will conduct in the coming weeks, months and years, will help scientists better assess the geophysical processes associated with earthquakes along large faults and better understand the risks.

UAVSAR uses a technique called interferometric synthetic aperture radar, or InSAR, that sends pulses of microwave energy from the aircraft to the ground to detect and measure very subtle deformations in Earth's surface, such as those caused by earthquakes, volcanoes, landslides and glacier movements. Flying at a nominal altitude of 12,500 meters (41,000 feet), the radar, located in a pod under the aircraft's belly, collects data over a selected region. It then flies over the same region again, minutes to months later, using the aircraft's advanced navigation system to precisely fly over the same path to an accuracy of within 5 meters (16.5 feet). By comparing these camera-like images, interferograms are formed that have encoded the surface deformation, from which scientists can measure the slow surface deformations involved with the buildup and release of strain along earthquake faults.

Since November of 2009, JPL scientists have collected data gathered on a number of Gulfstream III flights over California's San Andreas fault and other major California earthquake faults, a process that will be repeated about every six months for the next several years. From such data, scientists will create 3-D maps for regions of interest.

Flight plans call for multiple observations of the Hispaniola faults this week and in early to mid-February. Subsequent flights may be added based on events in Haiti and aircraft availability. After processing, NASA will make the UAVSAR imagery available to the public through the JPL UAVSAR website and the Alaska Satellite Facility Distributed Active Archive Center. The initial data will be available in several weeks.

Lundgren said the Dominican Republic flights over the Septentrional fault will provide scientists with a baseline set of radar imagery in the event of future earthquakes there. Such observations, combined with post-event radar imagery, will allow scientists to measure ground deformation at the time of the earthquakes to determine how slip on the faults is distributed and also to monitor longer-term motions after the earthquakes to learn more about fault zone properties. The UAVSAR data could also be used to pinpoint exactly which part of the fault slipped during an earthquake, data that can be used by rescue and damage assessment officials to better estimate what areas might be most affected.