This animation shows daily surface temperature of the Greenland ice sheet from May 1 through September 1, 2005. An overlay contains a date bar, a color bar and text labels. Credit: NASA/Goddard Space Flight Center Scientific Visualization Studio; The Next Generation Blue Marble data courtesy Reto Stockli (NASA/GSFC)
> View animation (14.4 Mb m1v file)
> Download other versions
A new NASA study confirms that the surface temperature of Greenland's massive ice sheet has been rising, stoked by warming air temperatures, and fueling loss of the island's ice at the surface and throughout the mass beneath.

Greenland's enormous ice sheet is home to enough ice to raise sea level by about 23 feet if the entire ice sheet were to melt into surrounding waters. Though the loss of the whole ice sheet is unlikely, loss from Greenland's ice mass has already contributed in part to 20th century sea level rise of about two millimeters per year, and future melt has the potential to impact people and economies across the globe. So NASA scientists used state-of-the-art NASA satellite technologies to explore the behavior of the ice sheet, revealing a relationship between changes at the surface and below. The new NASA study appears in the January issue of the quarterly Journal of Glaciology. 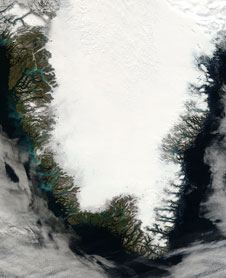 This MODIS Terra image, acquired August 23, 2006, shows the southern portion of Greenland. The Greenlandic ice cap covers about 80% of the island's surface. Credit: NASA
> Click for larger image. A team led by Hall used temperature data captured each day from 2000 through 2006 from the Moderate Resolution Imaging Spectroradiometer (MODIS) instrument on NASA's Terra satellite. They measured changes in the surface temperature to within about one degree of accuracy from about 440 miles away in space. They also measured melt area within each of the six major drainage basins of the ice sheet to see whether melt has become more extensive and longer lasting, and to see how the various parts of the ice sheet are reacting to increasing air temperatures.

The team took their research at the ice sheet's surface a step further, becoming the first to pair the surface temperature data with satellite gravity data to investigate what internal ice changes occur as the surface melts. Geophysicist and co-author, Scott Luthcke, also of NASA Goddard, developed a mathematical solution, using gravity data from NASA's Gravity Recovery and Climate Experiment (GRACE) twin satellite system. "This solution has permitted greatly-improved detail in both time and space, allowing measurement of mass change at the low-elevation coastal regions of the ice sheet where most of the melting is occurring," said Luthcke.

The paired surface temperature and gravity data confirm a strong connection between melting on ice sheet surfaces in areas below 6,500 feet in elevation, and ice loss throughout the ice sheet's giant mass. The result led Hall's team to conclude that the start of surface melting triggers mass loss of ice over large areas of the ice sheet. 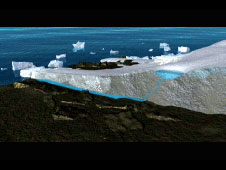 Melt water puddles on the Greenland ice sheet and drains through cracks to the surface below. This water lubricates the underlying bedrock, causing the ice to flow faster toward the sea. Credit: NASA
> Click here to view animation.
> Click here to view larger animation still. The beginning of mass loss is highly sensitive to even minor amounts of surface melt. Hall and her colleagues showed that when less than two percent of the lower reaches of the ice sheet begins to melt at the surface, mass loss of ice can result. For example, in 2004 and 2005, the GRACE satellites recorded the onset of rapid subsurface ice loss less than 15 days after surface melting was captured by the Terra satellite.

"We're seeing a close correspondence between the date that surface melting begins, and the date that mass loss of ice begins beneath the surface," Hall said. "This indicates that the meltwater from the surface must be traveling down to the base of the ice sheet -- through over a mile of ice -- very rapidly, where its presence allows the ice at the base to slide forward, speeding the flow of outlet glaciers that discharge icebergs and water into the surrounding ocean."

Hall underscores the importance of combining results from multiple NASA satellites to improve understanding of the ice sheet's behavior. "We find that when we look at results from different satellite sensors and those results agree, the confidence in the conclusions is very high," said Hall. 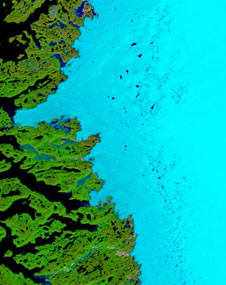 The MODIS instrument acquired this image of melt ponds on Greenland's western coast in June, 2006. The ponds appear as dark blue dots on the aqua blue background. Credit: NASA
> Click for larger image. Hall and her colleagues believe that air temperature increases are responsible for increasing ice sheet surface temperatures and thus more-extensive surface melt. "If air temperatures continue rising over Greenland, surface melt will continue to play a large role in the overall loss of ice mass." She also noted that the team's detailed study using the high-resolution MODIS data show that various parts of the ice sheet are reacting differently to air temperature increases, perhaps reacting to different climate-driven forces. This is important because much of the southern coastal area of the ice sheet is already near the melting point (0 degrees Celsius) during the summer.