Researchers Warm Up to Melt's Role in Greenland Ice Loss 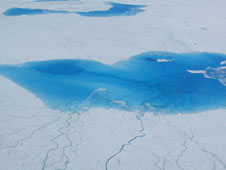 Scientists survey surface lakes brought about by seasonal melt of the Greenland Ice Sheet in July 2006. Credit: Joughin/UW Polar Science Center
> High resolution image
In July 2006, researchers afloat in a dinghy on a mile-wide glacial lake in Greenland studied features of the lake and ice 40 feet below. Ten days later the entire contents of the lake emptied through a crack in the ice with a force equaling the pummeling water of Niagara Falls. The entire process only took 90 minutes.

Observations before, during and after this swift, forceful event were collected and analyzed by a team led by Ian Joughin of the University of Washington in Seattle and Sarah Das of the Woods Hole Oceanographic Institution in Woods Hole, Mass. Their first-of-a-kind observations confirm the structure of the Greenland Ice Sheet plumbing, and go further to show that summertime melt indeed contributes to the speed up of ice loss. They also conclude, however, that summertime melt is not as critical a factor as other causes of ice loss. Research by Joughin and colleagues, published April 17 in Science Express, was funded in part by NASA and the National Science Foundation.

Scientists know that Greenland is losing ice. Much of Greenland's ice sheet is slow moving, creeping toward the ocean where the ice can calve off as icebergs. The landscape is also dumps ice into the ocean through outlet glaciers – rivers of ice that channel through valleys of bedrock and move at least 10 times faster than the ice sheet. Whether or not summertime melt has a significant influence on the speed of these flows has been an endless topic of debate among scientists – until now. 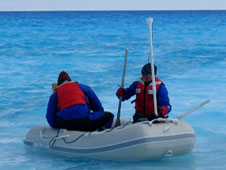 Ian Howat and Twila Moon of the University of Washington in Seattle conduct a sonar survey of a melt lake on the surface of the Greenland Ice Sheet. Credit: Joughin/UW Polar Science Center
> High resolution image "For years people have said that the increasing length and intensity of the melt season in Greenland could yield an increase in ice discharge," said Joughin, lead author on the paper in Science. "Greater melt in future summers would cause ice to flow faster toward the coast and draw down more of the ice sheet."

Scientists have used computer models to show how melt could contribute to the observed speed up of the ice sheet. Meltwater travels through cracks in the ice down to the base of the mile-thick ice sheet where it forms a lubricating layer between the ice and the land. The fluid layer then makes it easier for the ice to slip away toward the ocean. The effect, however, had never been observed in Greenland on a large-scale, a fact that motivated Joughin and colleagues to get a closer look.

In 2006, Joughin embarked on an expedition by airplane to locate lakes on the ice sheet that they had identified in advance using NASA's Moderate-resolution Imaging Spectroradiometer (MODIS) instrument on NASA's Terra and Aqua satellites. The team selected two lakes full of meltwater and set up Global Positioning System (GPS) equipment to measure ground movement in a limited area but over frequent intervals, every two days. They also collected data from the NASA-launched and Canadian-owned satellite RADARSAT, which could provide similar movement information over an area hundreds of miles wide, but could make those measurements only every 24 days. When combined, these data helped the researchers identify relative changes in ice movements across the entire ice sheet.

They found that the influence of the violent draining of the lakes had a short-lived influence on the local movement of the ice sheet. Speedup during periods of summer were widespread across Greenland, suggesting that the ice sheet's plumbing is composed of a drainage network that quickly distributes the lubricating meltwater throughout the base of the ice sheet, as opposed to the water remaining confined to a single isolated crack. 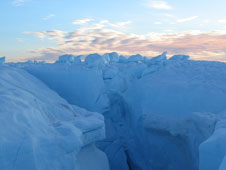 A large fracture is visible in a lake bed on the Greenland Ice Sheet after it drained the lake's entire liquid contents. Credit: Joughin/UW Polar Science Center
> High resolution image As for the relative speed of movement across Greenland, the researchers found that the slow-moving ice sheet saw seasonal increases in speed ranging from 50 to 100 percent. Despite the speed up, the ice sheet makes a relatively small contribution to ice loss compared to the already fast-moving outlet glaciers. The fast-moving outlet glaciers, however, are not affected as much by seasonal melt, which accounts for a speed increase of up to 15 percent and in many cases much less. "If you're really going to get a lot of ice out of Greenland, that would have to occur through outlet glaciers, but those are not being affected very much by seasonal melt," Joughin said. "The outlet glaciers are more affected by the removal of their shelves and grounded ice in their fjords, which decreases resistance to ice flow."