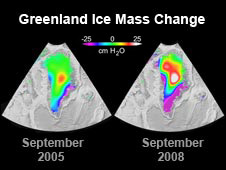 
A new international study finds that ice losses from Greenland's ice sheet, which have been increasing over the past decade in its southern region, are now spreading rapidly up its northwest coast.

The researchers, including Isabella Velicogna, jointly of NASA's Jet Propulsion Laboratory, Pasadena, Calif., and the University of California, Irvine, compared data from the JPL-built and managed Gravity Recovery and Climate Experiment (Grace) mission with continuous GPS measurements made from long-term sites on bedrock on the ice sheet's edges. The Grace and GPS data gave the researchers monthly averages of crustal uplift caused by ice mass loss. They found that the acceleration in ice loss began moving up the northwest coast of Greenland in late 2005. The authors speculate the dramatic ice mass losses on Greenland's northwest coast are caused by some of the big glaciers in the region sliding downhill faster and dumping more ice into the sea.

"These changes on the Greenland ice sheet are happening fast, and we are definitely losing more mass than we had anticipated," says Velicogna. "We also are seeing this trend in Antarctica, a sign that warming temperatures really are having an effect on ice in Earth's cold regions."

The NASA/National Science Foundation-funded study was led by Shfaqat Abbas Khan of the Denmark Technical Institute's National Space Institute in Copenhagen. Other participating institutions included the University of Colorado at Boulder and Ohio State University, Columbus.