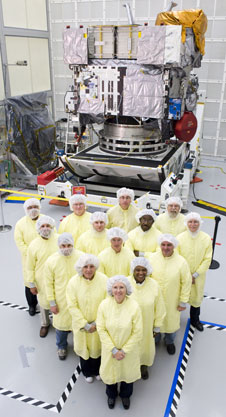 > Click for printable image
The GOES-P instrument team is pictured here in the Boeing facility with the GOES-P satellite after completion of the instrument testing. Credit: Boeing Corp. Just two months after the successful launch of the GOES-O spacecraft, now called GOES-14 in orbit, the NASA team removed the GOES-P spacecraft from storage and commenced its post storage testing. GOES-P is being prepared for an early March 2010 launch and if the launch schedule holds, it boasts an unprecedented two launches in approximately 8 months.

The GOES-P spacecraft completed its build late in 2006 (just after the launch of GOES-N) and since that time the spacecraft has been in storage at the Boeing Facility in El Segundo, California.

NASA has a commitment, to the National Oceanic and Atmospheric Administration (NOAA), for the launch of the GOES-P spacecraft in April 2010. The combined NASA and contractor teams (Boeing, ITT and LM) are working hard to meet their commitment and are now preparing the GOES–P spacecraft for shipment to the launch base. The project has recently completed a major milestone in the completion of its instrument testing.

During this testing, the NASA team demonstrated the instruments continue to function as expected and will meet the stringent mission requirements. The instruments include the Imager and Sounder, built by ITT, and the Solar X-Ray Imager built by Lockheed Martin.