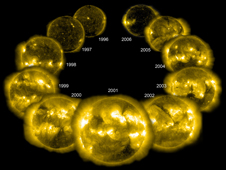 During periods of peak activity (front three images) sunspots, solar flares and coronal mass ejections are more common, and the sun emits slightly more energy than during periods of low activity (back images). The amount of energy that strikes Earth’s atmosphere -- called total solar irradiance (TSI) -- fluctuates by about 0.1 percent over the course of the sun's 11-year cycle, even though the soft X-ray wavelengths shown in this image vary by much greater amounts. Credit: Steele Hill, SOHO, NASA/ESA
> Larger image 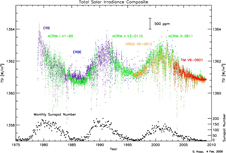 Scientists have compiled a three-decade record of total solar irradiance by patching together data from U.S. and European satellites. Fluctuations in irradiance correspond well with the cycling of sunspots. To ensure continuity, data from Glory’s TIM instrument must overlap with data from an earlier TIM (in red on this plot), which launched in 2003. Credit: Greg Kopp, LASP
> Larger image

To improve the accuracy of the Glory TIM instrument, scientists at the Laboratory for Atmospheric and Space Physics performed innovative tests at the new TSI Radiometer Facility. In this photo, calibration engineers run tests on a ground-based TIM instrument, which is visible in the foreground. Credit: Greg Kopp, LASP
> Larger image 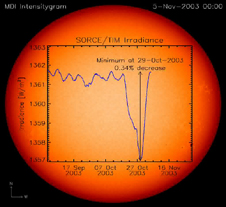 Analyzing the sun and its effects on climate is complicated by the fact that the amount of radiation arriving from the sun is not constant -- even on a daily basis. These data from October 2003 display the largest recorded short-term decrease in TSI. These short-term changes are due to a balance between decreases caused by sunspots and increases caused by faculae, which are the bright areas that surround sunspots. Credit: Greg Kopp, LASP
> View video During the Maunder Minimum, a period of diminished solar activity between 1645 and 1715, sunspots were rare on the face of the sun, sometimes disappearing entirely for months to years. At the same time, Earth experienced a bitter cold period known as the "Little Ice Age."

Were the events connected? Scientists cannot say for sure, but it's quite likely. Slowdowns in solar activity -- evidenced by reductions in sunspot numbers -- are known to coincide with decreases in the amount of energy discharged by the sun. During the Little Ice Age, though, few would have thought to track total solar irradiance (TSI), the amount of solar energy striking Earth's upper atmosphere. In fact, the scientific instrument needed to make such measurements -- a spaceborne radiometer -- was still three centuries into the future.

Modern scientists have several tools for studying TSI. Since the 1970s, scientists have relied upon a collection of radiometers on American and European spacecraft to keep a close eye on solar fluctuations from above the atmosphere, which intercepts much of the sun's radiation. When NASA launches the Glory satellite this fall (no earlier than October 2009), researchers will have a more accurate instrument for measuring TSI than they've ever had before.

The Total Irradiance Monitor (TIM) on Glory is more sophisticated, but still related in concept to the very earliest ground-based solar radiometers, which were invented in 1838. Where those radiometers used sunlight to heat water and indicate the intensity of the sun's brightness at the Earth's surface, Glory's TIM instrument will use a black-coated metallic detector to measure how much heat is produced by solar radiation as it reaches the top of the Earth's atmosphere.

Solar bolometers, as this subset of radiometers is called, have been flown on ten previous missions. Nimbus-7, launched in 1978, included one of the first spaceborne bolometers, and progressively more advanced instruments have followed on other NASA, National Oceanic and Atmospheric Administration, and European Space Agency missions.

In 2003, a first generation TIM instrument went aloft with the Solar Radiation and Climate Experiment (SORCE) satellite. Learning from that instrument, engineers have tweaked the optical and electrical sensors to make the Glory TIM even more capable of measuring the true solar brightness and its fluctuations.

"There's no doubt that's an ambitious goal, but I wouldn't be surprised if they pull it off," said Joseph Rice, a physicist at the National Institute of Standards and Technology in Gaithersburg, Md.

Beyond engineering improvements, the Glory irradiance monitor has another advantage: access to the one-of-a-kind TSI Radiometer Facility. Funded by NASA and built by the Laboratory for Atmospheric and Space Physics in Boulder, Colo., the new facility has allowed Kopp's team to calibrate the instrument in the same configuration and under the same conditions as it will endure in space. In January 2009, the Glory TIM instrument underwent a rigorous battery of tests while being compared to a highly accurate ground-based radiometer.

"This was the first time a TSI instrument has ever been validated end-to-end," Kopp said. "The improvements in accuracy will make it possible to detect long-term changes in the sun's output much more quickly." The data will help scientists say more definitively whether the sun’s output is gradually trending upward or downward, and whether the trend is influencing the pace of climate change.

Existing measurements offer a rough sketch, but they’re not quite accurate enough over decades to centuries to paint a clear picture of whether changes in TSI reflect real changes on the sun or just artifacts of different instrument designs. That's because the radiometers that have measured TSI so far have all reported values at slightly different levels and have all been calibrated differently, injecting a degree of uncertainty into the record.

The new TIM should be sufficiently accurate to quickly yield definitive data on whether solar irradiance is trending up or down. Modelers estimate that TSI increased roughly 0.08 percent as the Sun exited the Maunder Minimum, which lasted for much of the 1700s. But even if TSI radiometers had been available at the time, the increase in irradiance was so gradual that identifying the trend would have been difficult.

Detecting such subtle changes is where the Glory TIM shines. Prior to SORCE, most TSI instruments had only 0.1 percent accuracy, and could not have reliably detected a 0.08 percent change over a century, Kopp explained. The improved accuracy of the SORCE TIM (0.035 percent) would detect such a change in about 35 years. The Glory TIM, meanwhile, should reduce the time needed to nearly ten years.

Getting TSI right has profound implications for understanding Earth's climate. Thanks to previous orbiting radiometers, scientists know TSI varies by roughly 0.1 percent through the sun’s 11-year magnetic cycle. Such a variation cannot explain the intensity and speed of the warming trends on Earth during the last century, explained Judith Lean, a solar physicist at the U.S. Naval Research Laboratory in Washington, D.C. But, that's not to say that the sun has no influence on climate change.

While total solar irradiance changes by 0.1 percent, the change in the intensity of ultraviolet light varies by much larger amounts, scientists have discovered. Research shows such variations in the Sun's emissions can affect the ozone layer and the way energy moves both vertically and horizontally through the atmosphere.

After examining the historical TSI database, some scientists have suggested that solar irradiance could account for as much as a quarter of recent global warming. But without a continuous and reliable TSI record, Kopp and Lean point out, there will always be room for skeptics to blame global warming entirely on the sun, even when most evidence suggests human activities are the key influence on modern climate changes.

Beyond that, there's a big "what if" percolating through the scientific community. The 0.1 percent variation in solar irradiance is certainly too subtle to explain all of the recent warming. "But, what if -- as many assume -- much longer solar cycles are also at work?" said Lean. In that case, it's not impossible that long-term patterns -- proceeding over hundreds or thousands of years -- could cause more severe swings in TSI.

Could a modern day Maunder Minimum offset the warming influence of greenhouse gases or even throw us back into another little ice age? "It's extremely unlikely," said Lean, "but we won't know for sure unless we keep up and perfect our measurements."