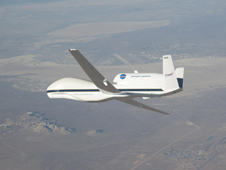 The Global Hawk can fly autonomously to altitudes above 60,000 feet -- roughly twice as high as a commercial airliner -- and as far as 11,000 nautical miles. Operators pre-program a flight path, and then the plane flies itself for as long as 30 hours. Credit: NASA/Dryden/Carla Thomas
› Larger image 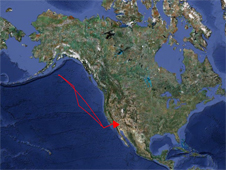 On its April 7 flight, the Global Hawk flew approximately 4,500 nautical miles along a flight path that took it to 150.3 degrees West longitude and 54.6 degrees North latitude, just south of Alaska's Kodiak Island. The flight lasted 14.1 hours and flew up to 60,900 feet in altitude. Credit: NASA/Dryden
› Larger image NASA pilots and flight engineers, together with colleagues from the National Oceanic and Atmospheric Administration (NOAA), have successfully completed the first science flight of the Global Hawk unpiloted aircraft system over the Pacific Ocean. The flight was the first of five scheduled for this month's Global Hawk Pacific (GloPac) mission to study atmospheric science over the Pacific and Arctic oceans.

The Global Hawk is a robotic plane that can fly autonomously to altitudes above 60,000 feet (18.3 kilometers) -- roughly twice as high as a commercial airliner -- and as far as 11,000 nautical miles (20,000 kilometers) -- half the circumference of Earth. Operators pre-program a flight path, and then the plane flies itself for as long as 30 hours, staying in contact through satellite and line-of-site communications to the ground control station at NASA's Dryden Flight Research Center in California's Mojave Desert.

"The Global Hawk is a revolutionary aircraft for science because of its enormous range and endurance," said Paul Newman, co-mission scientist for GloPac and an atmospheric scientist from NASA's Goddard Space Flight Center, Greenbelt, Md. "No other science platform provides this much range and time to sample rapidly evolving atmospheric phenomena. This mission is our first opportunity to demonstrate the unique capabilities of this plane, while gathering atmospheric data in a region that is poorly sampled."

In yesterday's flight, the plane flew approximately 4,500 nautical miles (8,300 kilometers) along a flight path that took it from Dryden to 150.3 degrees West longitude and 54.6 degrees North latitude, just south of Alaska's Kodiak Island. The flight lasted 14.1 hours and flew up to 60,900 feet (18.6 kilometers) in altitude.

Reaching Higher into the Atmosphere and Staying There

"The Global Hawk is a fantastic platform because it gives us expanded access to the atmosphere beyond what we have with piloted aircraft," said David Fahey, co-mission scientist and a research physicist at NOAA's Earth System Research Laboratory in Boulder, Colo. "We can go to regions we couldn't reach or go to previously explored regions and study them for extended periods that are impossible with conventional planes."

The plane carries 11 instruments to sample the chemical composition of Earth’s two lowest atmospheric layers, to profile the dynamics and meteorology of both, and to observe the distribution of clouds and aerosol particles. Project scientists expect to take observations from the equator to the Arctic Circle, and west of Hawaii. 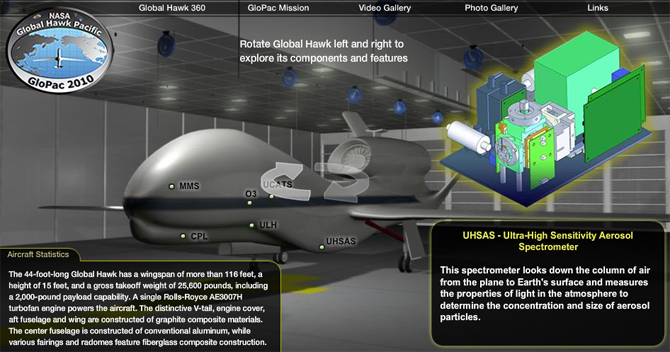 The Global Hawk carries 11 instruments to sample the chemical composition of Earth’s two lowest atmospheric layers, to profile the dynamics and meteorology of both, and to observe the distribution of clouds and aerosol particles. View this interactive feature to learn more about each of the aircraft's instruments. Credit: NASA/Scott Hanger
› GloPac Interactive

The timing of GloPac flights should allow scientists to observe the breakup of the polar vortex, a large-scale cyclone that dominates winter weather patterns around the Arctic and is particularly important for understanding ozone depletion in the Northern Hemisphere. Researchers appear to have gathered some measurements from the polar vortex during yesterday's flight.

Scientists also expect to gather data between 45,000 and 65,000 feet, where many greenhouse gases and ozone-depleting substances are destroyed. They will measure dust, smoke and pollution that cross the Pacific from Asia and Siberia and affect U.S. air quality.

Several instruments will measure aerosols, which play an important but incompletely understood role in Earth's radiation budget. Some aerosols absorb warming sunlight, while others reflect it back to space and cool the planet. High-altitude particles can serve as nuclei for the formation of clouds. 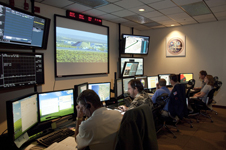 The aircraft can then take off, fly its mission, and land without any additional pilot or scientist intervention. Though the plane is designed to fly on its own, pilots can change course or altitude based on the atmospheric phenomena ahead. Researchers also have the ability to command and control their instruments from the ground.

GloPac will make several flights directly under the path of NASA’s Aura satellite and other "A-train” Earth-observing satellites, "allowing us to calibrate and confirm what we see from space," Newman said. GloPac is being conducted in conjunction with NASA’s Aura Validation Experiment (AVE).

During the first science flight, the Global Hawk flew under the Cloud-Aerosol LIDAR and Infrared Pathfinder Satellite Observation (CALIPSO), a joint project of NASA and France's Centre National d'Etudes Spatiales.