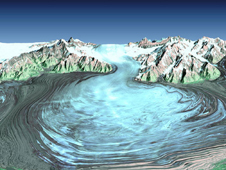 This image shows Malaspina Glacier, a classic Gulf of Alaska mountain glacier, in southeastern Alaska. The glacier spills into the Yakutat Bay, where researchers determined the most ice mass loss occurred during their study period between 2004 and 2007. The image was created from a Landsat satellite image and NASA's Shuttle Radar Topography Mission. Credit: NASA
> Larger image 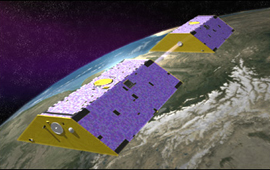 This artist's concept shows GRACE's twin satellites, which orbit Earth in a back-to-back manner and change positions in response to variations in Earth's gravity field. The GRACE satellites house microwave ranging systems that measure the change in the distance between the satellites over time, enabling them to essentially "weigh" the changes in Gulf of Alaska glaciers. Credit: NASA
> Larger image
A NASA-led research team has used satellite data to make the most precise measurements to date of changes in the mass of mountain glaciers in the Gulf of Alaska, a region expected to be a significant contributor to global sea level rise over the next 50-100 years.

Geophysicist Scott Luthcke of NASA's Goddard Space Flight Center, Greenbelt, Md., and colleagues knew from well-documented research that changes in the cryosphere -- glaciers, ice caps, and other parts of the globe covered year-round by ice -- are a key source of most global sea level rise. Melting ice will also bring changes to freshwater resources and wildlife habitat. Knowing that such ice-covered areas are difficult to observe consistently, the team worked to develop a satellite-based method that could accurately quantify glacial mass changes across seasons and years, and even discern whether individual glacier regions are growing or shrinking.

The study’s authors found that the annual ice mass lost from glaciers in the Gulf of Alaska has been 84 gigatons annually, about five times the average annual flow of the Colorado River through the Grand Canyon and equal to the entire amount of water in the Chesapeake Bay.

“The Gulf of Alaska region is 20 times smaller than the ice-covered area of Greenland, yet it contributes nearly half as much freshwater melt as Greenland and accounts for about 15 percent of present-day global sea level rise stemming from melting ice,” said Luthcke, lead author of the study which will appear this week in the Journal of Glaciology. “Considering that the Gulf of Alaska makes such a disproportionate contribution, it is vital that we know more about the nature of glacial change there.”

Luthcke and colleagues found a way to remotely measure the “mass balance” of a glacier; that is, the net annual difference between ice accumulation and ice loss. Past measurements of glacial mass balance in remote mountain ranges have been sparse or imprecise. Ground-based sensors can provide long-term data, but such data points are scattered due to the inaccessibility of many remote mountain ranges. Altimeters aboard aircraft can measure changes in the height of glaciers, but the sampling is sporadic because flights are relatively infrequent.

Glaciers in the coastal environments on the edge of the Arctic or Antarctic shed and gain mass rapidly, a high mass turnover that is particularly sensitive to climate change. Warming seas can accelerate the motion of tidewater glaciers, and melt water on glacial surfaces can flow to the floors of glaciers and serve as a lubricant as the ice slides toward the sea. The subsequent addition of freshwater to the ocean contributes to one of two sources of global sea level rise; “eustatic” rise resulting from melted ice in the form of freshwater, with the other source set off by “thermal expansion,” sea level rise that occurs due to warming ocean temperatures.

The Goddard-led research team developed a new data analysis technique for NASA's Gravity Recovery and Climate Experiment (GRACE) mission. GRACE is made up of twin satellites that orbit Earth about 137 miles apart and 300 miles above Earth's surface. The positions of the two satellites change in response to variations in Earth's gravity field, which is stronger or weaker depending on the land or ice mass that they are flying over. Microwave ranging systems measure the distance between the two satellites down to the width of a human hair, so by measuring the change in the distance between the satellites over time, researchers can essentially "weigh" the changes in Gulf of Alaska glaciers. 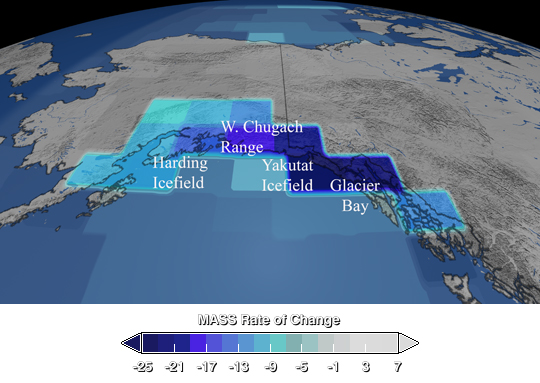 Using data collected by the GRACE satellites from 2003-2007, as well as unique processing and analysis techniques, Luthcke and colleagues were able to measure the mass of the glaciers every 10 days across an area spanning 18,919 square miles, about the equivalent of Vermont and New Hampshire combined.

The team found the largest ice mass losses occurring in the Yakutat, Glacier Bay, and St. Elias regions. Those observations are consistent with recent studies from aircraft-based altimeters and other satellites.

“The consistent and direct measurement of ice-mass change made possible by the GRACE data and the analysis techniques applied in this study provide unprecedented observations that further our knowledge of the region’s complex ice evolution,” said Luthcke.

The most rapid glacial melt, according to Luthcke and colleagues, came in response to the summer heat wave of 2004, when the region's glaciers shed 374 gigatons of ice, or about 98 cubic miles of ice. In comparison, the record for Greenland ice melt was 500 gigatons, or about 131 cubic miles, during the summer of 2007.

"With such rapid change taking place in such a critical area, we need to be able to more reliably observe how these glaciers are responding," said Luthcke. "The direct measurement of ice-mass variation is important for improving our modeling capability and for ultimately predicting future changes."