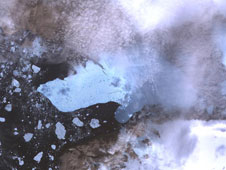 On Aug. 5, 2010, an enormous chunk of ice, about 251 square kilometers (97 square miles) in size, or roughly four times the size of Manhattan, broke off the Petermann Glacier along the northwestern coast of Greenland. The Petermann Glacier lost about one-quarter of its 70-kilometer-long (40-miles) floating ice shelf, according to researchers at the University of Delaware, Newark, Dela. The recently calved iceberg is the largest to form in the Arctic in 50 years.

Scientists are monitoring the movement of the iceberg closely. If it moves out into the narrow Nares Strait, there is the potential it could interfere with or block the loss of Arctic sea ice out of the Arctic Ocean into Baffin Bay, a sea that connects the Arctic and Atlantic Oceans. The ice could also eventually pose a hazard to shipping.

This image of Petermann Glacier and the new iceberg was acquired from the Advanced Spaceborne Thermal Emission and Reflection Radiometer (ASTER) instrument on NASA's Terra spacecraft on Aug. 12, 2010. It covers an area of 49.5 by 31.5 kilometers (30.7 by 19.5 miles) and is located at 81.1 degrees north latitude, 61.7 degrees west longitude.

More information about ASTER is available at http://asterweb.jpl.nasa.gov/.